A Catered Doggie Wedding (A Mystery With Recipes #17) (Hardcover) 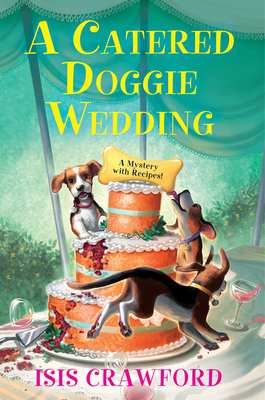 This is book number 17 in the A Mystery With Recipes series.

When Bernie and Libby Simmons, sisters and co-owners of A Little Taste of Heaven, are hired to cater a doggie wedding for a pair of posh golden retrievers, they wind up stepping into a fresh murder investigation!

At A Little Taste of Heaven, Bernie and Libby Simmons cater all sorts of affairs, from book clubs to bridal showers and everything in between. So when their counterman, Googie, asks them to cater a doggie wedding for his girlfriend Jenni’s eight-month-old golden retrievers, they jump on the opportunity. The reception, which will also serve as a grand opening for Jennie’s new doggie daycare center, is no small affair. Bertha and Ernie—the bride and groom—will be celebrating with more than a hundred guests, including the puppers’ pals and their people.

But all weddings, even shaggy shindigs, come with some drama. Not everyone in town is excited about the upcoming pup-tuials—or Jenni’s business. Someone is sending threatening messages to Bernie, Libby, and others in town, warning them to cancel the festivities. But when folks start dying under curious circumstances, Bernie and Libby know it’s up to them to untangle the leads and find the murderer before anyone else bites it.

Isis Crawford was born in Egypt to parents who were in the diplomatic corps. When she was five, her family returned to the States, where her mother opened a restaurant in Upper Westchester County and her father became a university professor. Since then Isis has combined her parents' love of food and travel by running a catering service as well as penning numerous travel-related articles about places ranging from Omsk to Paraguay. Married, with twin boys, she presently resides in Hastings-on-Hudson, New York, where she is working on the next Bernie and Libby culinary mystery. Visit her at IsisCrawford.com.