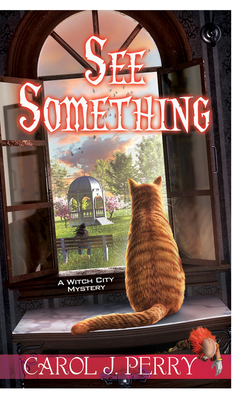 This is book number 11 in the A Witch City Mystery series.

Lee has been promoted from field reporter to program director. Keeping track of all the shows and managing the local TV personalities--including a cowboy, a clown, and a performing dog--has her head spinning. Perhaps that's what makes her take pity on the distraught woman she finds sitting alone on a bench on the Salem common. When she realizes that the poor woman doesn't even know her own name, Lee takes her into the warmth of the home she shares with her Aunt Ibby and their clairvoyant gentleman cat, O'Ryan. Maybe Lee can use her own psychic gifts to divine the woman's identity.

Lee's detective beau Pete Mondello wants to talk to the "Jane Doe," but before he can investigate, he's called to a crime scene. A body has been found washed up in a narrow harbor cove. As harmless as her new houseguest seems, Lee can't help but wonder if she may be harboring a killer...

Carol J. Perry knew as a child that she wanted to be a writer. A voracious reader, whose list for Santa consisted mostly of book titles, she never lost sight of that goal. While living in Florida, Carol was on assignment for Southern Travel Magazine, preparing an article on the world's tallest sand castle which was being built near her home. That combination of events inspired her first young adult novel, Sand Castle Summer. That book was soon followed by half a dozen more. Carol and her husband Dan live in the Tampa Bay area of Florida with two cats and a Black Lab. Visit her at caroljperry.com.