Death on the Green (The Dublin Driver Mysteries #2) (Mass Market) 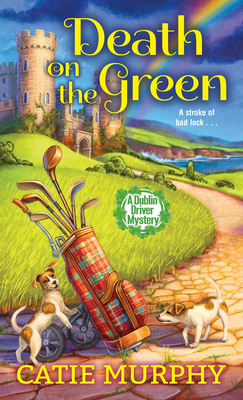 By Catie Murphy
$8.99
On Our Shelves Now

This is book number 2 in the The Dublin Driver Mysteries series.

“There is so much to like about the cozy perfection that is Catie Murphy’s Death on the Green, from the lush Irish travelogue to the precise balance between comic relief and crime.”
—Bookpage STARRED

As an American in Dublin, limo driver Megan Malone will need the luck of the Irish to avoid a head-on collision—with a killer . . .

Life has been non-stop excitement for American Army veteran Megan Malone ever since she moved to Ireland and became a driver for Dublin’s Leprechaun Limousine Service. She’s solved a murder and adopted two lovable Jack Russell puppies. Currently, she’s driving world-class champion golfer Martin Walsh, and he’s invited her to join him while he plays in a tournament at a prestigious Irish locale. Unfortunately, there’s a surprise waiting for her on the course—a body floating in a water hazard.

Everyone loved golfer Lou MacDonald, yet he clearly teed off someone enough to be murdered. Martin seems to be the only one with a motive. However, he also has an alibi: Megan and hundreds of his fans were watching him play. Now, with a clubhouse at a historical lodge full of secrets and a dashing Irish detective by her side, Megan must hurry to uncover the links to the truth before the real killer takes a swing at someone else . . .

Catie Murphy, who has written numerous award‑winning fantasy and Sci‑fi books under the pseudonym C. E. Murphy, began writing around age six, when she submitted three poems to a school publication. The teacher producing the magazine selected (inevitably) the one she thought was by far the worst, but also told her—a six-year-old kid—to keep writing, which she has. She has also held the usual grab‑bag of jobs often seen in an authorial biography, including public library volunteer (at ages 9 and 10; it’s clear she was doomed to a career involving books), archival assistant, cannery worker, and web designer. Writing books is better.

She was born and raised in Alaska, and now lives with her family in her ancestral homeland of Ireland.