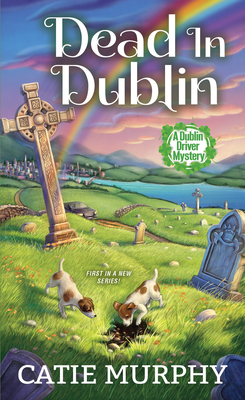 This is book number 1 in the The Dublin Driver Mysteries series.

Escape to Ireland with this charming whodunnit… Cozy fans will be entranced by the beautiful setting, the pair of adorable Jack Russell puppies, and of course—the deadly mystery at the heart of it all!

In Dublin’s fair city, where the girls are so pretty, murder occurs at the feet of sweet Molly Malone . . .

Ferrying tourists around Dublin for the Leprechaun Limo Service makes quite a change after years in the military. Still, Megan Malone is enjoying her life in Ireland. She likes the scenery, the easy pace, the quirky, quick-witted locals. Everything—except having one of her clients drop dead at the statue of fabled fishmonger, Molly Malone.

Most restaurant critics notch up their share of enemies. Elizabeth Darr, however, was a well-loved international star. She and her husband, Simon, had just had dinner when Elizabeth collapsed, and spoiled seafood is the first suspect. The restaurant’s owner, worried her business is doomed, begs Megan to look into it. Between her irate boss and a handsome Garda who’s both amused and annoyed by her persistence, Megan has her hands full even before she’s cajoled into taking care of two adorable Jack Russell puppies (which she is almost definitely not keeping). But if cockles and mussels aren’t to blame, can Megan find the real culprit . . .before another fishy death occurs?

Catie Murphy, who has written numerous award‑winning fantasy and Sci‑fi books under the pseudonym C. E. Murphy, began writing around age six, when she submitted three poems to a school publication. The teacher producing the magazine selected (inevitably) the one she thought was by far the worst, but also told her—a six-year-old kid—to keep writing, which she has. She has also held the usual grab‑bag of jobs often seen in an authorial biography, including public library volunteer (at ages 9 and 10; it’s clear she was doomed to a career involving books), archival assistant, cannery worker, and web designer. Writing books is better. She was born and raised in Alaska, and now lives with her family in her ancestral homeland of Ireland.

“Murphy’s Dublin feels immersive and authentic, and even minor characters add depth and detail . . . This is an auspicious series debut, and hopefully the luck of the Irish will hold for many more stories to come.”
—Bookpage STARRED REVIEW

“[Murphy’s] irrepressible debut provides a lively entry in the Dublin Driver Mysteries. A bad review can kill a restaurant—but what if a restaurant kills a reviewer?”
—Kirkus Reviews

“Dead in Dublin serves up an interesting whodunit story as it helps push the cozy mystery genre forward into the new decade. One cannot help but be curious to see how this new series unfolds.”
—Criminal Element