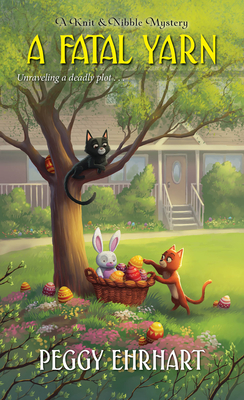 This is book number 5 in the A Knit & Nibble Mystery series.

Pamela Paterson and her Knit and Nibble club must clear the name of one of their knitters when he's accused of murdering the mayor . . .

The trees in Arborville, New Jersey, have started sporting sweaters. Part of the trend of public knitting art? Not exactly. An anonymous activist has been wrapping trunks in yarn to cover red X's that mark certain trees for removal by the town so they don't interfere with power lines. When the town's mayor—who supports cutting down the trees—is murdered, Pamela wonders if the tree hugger committed homicide to prevent arborcide. A knitter is arrested, but it's one of Knit and Nibble's own—the harmless Roland DeCamp, who was seen arguing with the mayor. Pamela is sure the police are barking up the wrong tree. With the help of her reporter friend Bettina, she branches off on her own investigation to root out the real killer . . .

Peggy Ehrhart is a former English professor who lives in Leonia, New Jersey, where she writes mysteries and plays blues guitar. She holds a Ph.D. in medieval literature from the University of Illinois and taught writing and literature at Queens College, CUNY, and Fairleigh Dickinson University, where she was a tenured full professor. Her short stories have appeared in Futures Mystery Anthology Magazine, Crime and Suspense, Flashing in the Gutters, Spinetingler, Crime Scene: New Jersey 2, and Murder New York Style. A longtime member of Mystery Writers of America and Sisters in Crime, Peggy served on the board of MWA New York as head of the Mentor Committee. She was president of Sisters in Crime NY/TriState from 2013 to 2015. Peggy regularly attends mystery‑writing conferences and participates in conference panels and also gives talks on mystery fiction at libraries in New York, Connecticut, and New Jersey.