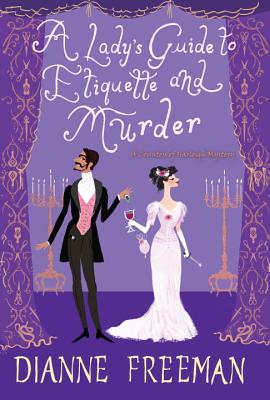 This is book number 1 in the A Countess of Harleigh Mystery series.

Frances Wynn, the American-born Countess of Harleigh, enjoys more freedom as a widow than she did as a wife. After an obligatory year spent mourning her philandering husband, Reggie, she puts aside her drab black gowns, leaving the countryside and her money-grubbing in-laws behind. With her young daughter in tow, Frances rents a home in Belgravia and prepares to welcome her sister, Lily, arriving from New York—for her first London season.

No sooner has Frances begun her new life than the ghosts of her old one make an unwelcome appearance. The Metropolitan police receive an anonymous letter implicating Frances in her husband’s death. Frances assures Inspector Delaney of her innocence, but she’s also keen to keep him from learning the scandalous circumstances of Reggie’s demise. As fate would have it, her dashing new neighbor, George Hazelton, is one of only two other people aware of the full story.

While busy with social engagements on Lily’s behalf, and worrying if Reggie really was murdered, Frances learns of mysterious burglaries plaguing London’s elite. The investigation brings death to her doorstep, and Frances rallies her wits, a circle of gossips, and the ever-chivalrous Mr. Hazelton to uncover the truth. A killer is in their midst, perhaps even among her sister’s suitors. And Frances must unmask the villain before Lily’s season—and their lives—come to a most unseemly end . . .

Dianne Freeman is the acclaimed author of the Countess of Harleigh Mystery series. She is an Agatha Award and Lefty Award finalist, as well as a nominee for the prestigious Mary Higgins Clark Award from Mystery Writers of America. She spent thirty years working in corporate accounting and finance and now writes full-time. Born and raised in Michigan, she and her husband now split their time between Michigan and Arizona. Visit her at www.DiFreeman.com.

Praise for
A Lady’s Guide to Etiquette and Murder

“A delightful tale of shenanigans among the British aristocracy. Lady Frances feels very
real—not too smart and spunky but no shrinking violet either.”
—Rhys Bowen, New York Times bestselling author

“This lighthearted debut tale of mystery, love, and a delightful sleuth will leave you wanting more—which is presumably just what Freeman had in mind.”
—Kirkus Reviews

“A mystery that’s witty and fun, with just the right amount of danger and romance to keep you turning pages.”
—Alyssa Maxwell, author of A Devious Death

“This debut is engaging to the end.”
—Booklist

“A fantastic blend of history, mystery and humor. I did not want to put it down. Perfect for fans of Agatha Christie and Georgette Heyer.”
—Darcie Wilde, National bestselling author of A Useful Woman and A Purely Private Matter

“Fans of Georgette Heyer will appreciate the hints of romance, while aficionados of Deanna Raybourn or D.M. Quincy will delight in the banter-filled dialog and period details.”
—Library Journal, Starred Review