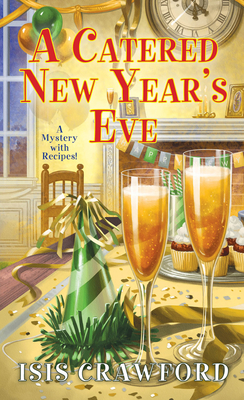 This is book number 15 in the A Mystery With Recipes series.

Sisters Bernie and Libby Simmons are reunited with a distant relative who wants them to cater a New Year's Eve event--and help find a guilty party...

It's been years since Bernie and Libby's parents became estranged from Ada Sinclair's side of the family-though the reasons for the rift are lost to history. The sisters, however, are intrigued when Ada makes contact and tells them about the long-ago deaths of her father and his business partner-both of which were ruled accidental.

Ada thinks otherwise-and has a plan. On New Year's Eve, she'll gather a group of guests and read from a diary she's found in her mother's attic that she thinks will expose the culprit. The Simmons sisters agree to provide refreshments for the bash, but when the night arrives, a guest drops dead. In the tumult, the diary disappears. When Ada is arrested for murder, she'll have to hope that Bernie and Libby can provide a resolution before the clock runs out.

"Fast paced and lively, this mystery will appeal to fans of Joanne Fluke and Laura Childs."
-Booklist