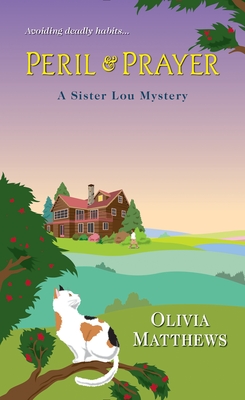 This is book number 2 in the A Sister Lou Mystery series.

This year's Advent retreat has been booked for the Congregation of the Sisters of St. Hermione of Ephesus at the pastoral Briar Coast Cabin Resorts in New York. But when the combative Sister Marianna practically loses her religion arguing over minor details with resort co-owner Autumn Tassler, Sister Louise “Lou” LaSalle blessedly steps in as peacemaker.

Only days later, Autumn is found strangled in her office, and hot-headed Sister Marianna becomes the sheriff’s deputies’ prime suspect. They believe her missing scarf may be the murder weapon, but Sister Lou believes Sister Marianna’s being framed. If she has a prayer of keeping Sister Marianna out of prison, she’ll need to once again put her faith in her nephew Chris LaSalle and reporter Shari Henson to help her solve the case. As the trio tries to cross suspects off the list, Sister Lou has no choice but to stick her neck out—if she’s going to unveil who was desperate enough to resort to murder . . .

Olivia Matthews is the cozy mystery pseudonym of award-winning author Patricia Sargeant. A voracious reader, Patricia first realized she wanted to be a published author at the age of nine. She’s been inspired by writers such as Walter Mosley, Dick Francis and Tami Hoag, who put ordinary characters in extraordinary situations. Her Sister Lou character was inspired by Catholic sisters whose courage, determination and faith have helped build communities and formed rich, lasting legacies. Raised in New York City, Patricia lives in Ohio with her husband. She loves to hear from readers. You can reach her at BooksByPatricia@yahoo.com. Visit her Olivia Matthews website, AuthorOliviaMatthews.com, and sign up for her enewsletter to learn about upcoming releases and events.

“The possibility of romance between two of the characters provides a pleasant foil to Sister Lou's pursuit of the truth for the sake of her old friend…in this debut of a saintly sleuth with some very human failings.”—Kirkus Reviews

“Although Sister Lou took the vow of obedience, she doesn’t always play by traditional rules, as readers of this first-in-the-new-series will soon find out. “Mayhem & Mass” is a promising addition to the cozy mystery genre, and its protagonist is delightful!” —Suspense Magazine

“Kudos to Olivia Matthews, who has created a new “hook” to draw in readers.”—Mystery Scene Magazine

“A spunky leading lady—who just happens to be a nun. Lou will go to the ends of the earth to uncover the truth. The plot is fast-paced and believable….A worthwhile mystery series here that fans will adore.”—RT Book Reviews