Death of a Bachelorette (A Jaine Austen Mystery #15) (Hardcover) 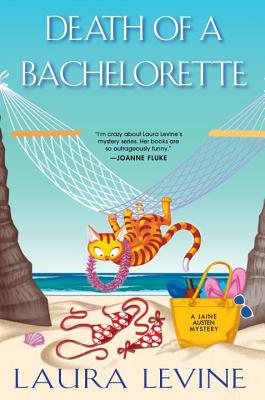 By Laura Levine
Unavailable to Order
Hard to Find

This is book number 15 in the A Jaine Austen Mystery series.

Freelance writer Jaine Austen thought working for a knock-off reality show in the tropics would be paradise. But when she and her kitty Prozac find themselves trapped between a dimwitted leading man, catty contestants, and a cold-blooded murderer, the splashy gig becomes one deadly nightmare...

Jaine’s life has been a royal pain since she started penning dialogue for Some Day My Prince Will Come—a cheesy dating show that features bachelorettes competing for the heart of Spencer Dalworth VII, a very distant heir to the British throne. As if fending off golf ball-sized bugs on a sweltering island wasn’t tough enough, Jaine must test her patience against an irritable production crew and fierce contestants who will do anything to get their prince...

But Jaine never expected murder to enter the script. When one of the finalists dies in a freak accident, it’s clear someone wanted the woman out of the race for good—and the police won’t allow a soul off the island until they seize the culprit. Terrified of existing another day without air conditioning and eager to return home, Jaine is throwing herself into the investigation. And she better pounce on clues quickly—or there won’t be any survivors left...

MURDER HAS NINE LIVES
“Enjoyable . . . This outing will keep cozy readers amused and wondering what absurdity will happen next.” —Publishers Weekly

“Jaine’s flair for the well-turned phrase puts her in the top tier of do-it-yourself detectives.” —Kirkus Reviews

“Jaine pursues justice and sanity in her usual hilarious yet smart way, with Levine infusing wit into her heroine’s every thought. A thoroughly fun read that will interest Evanovich fans.” —Booklist

DEATH OF A NEIGHBORHOOD WITCH
“Levine’s latest finds her at her witty and wacky best.” —Kirkus Reviews

THIS PEN FOR HIRE
“Laura Levine’s hilarious debut mystery, This Pen for Hire, is a laugh a page (or two or three) as well as a crafty puzzle. Sleuth Jaine Austen’s amused take on life, love, sex and L.A. will delight readers. Sheer fun!” —Carolyn Hart

LAURA LEVINE is a comedy writer whose television credits include The Bob Newhart Show, Laverne & Shirley, The Love Boat, The Jeffersons, Three's Company, and Mary Hartman, Mary Hartman. Her work has been published in The Washington Post and The Los Angeles Times. She lives in Los Angeles, and is currently working on the next Jaine Austen mystery. Readers can reach her at Jaineausten@aol.com, or her website: www.JaineAustenMysteries.com.