It Takes a Coven (A Witch City Mystery #6) (Mass Market) 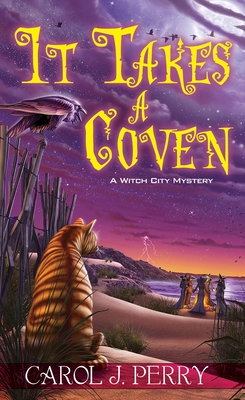 This is book number 6 in the A Witch City Mystery series.

When Lee Barrett joins a former student’s bridal party as maid of honor, she expects cake tastings and dress fittings. But wedding planning becomes more peculiar than Lee’s scrying talents could ever predict. There’s a magical baker, a best man with a checkered past, and a talking crow named Poe as the ring bearer. There’s also a kindly old man dead under his apple tree—one of a series of unexplained deaths hanging over the Wiccan community . . .

With witches dropping dead before they even come out of the proverbial broom closet, Lee’s best friend, River, fears she might have somehow unleashed a terrible curse on the city. Now, aided by Poe and her clairvoyant cat, Lee sets out to investigate. Are lives being claimed by vengeful supernatural forces—or by something more shocking? She soon discovers, casting light on the wicked truth can be one killer commitment . . .

Praise for the Witch City Mysteries

“Perfectly relaxing and readable.” —Kirkus Reviews on Look Both Ways