Every Body on Deck (A Savannah Reid Mystery #22) (Hardcover) 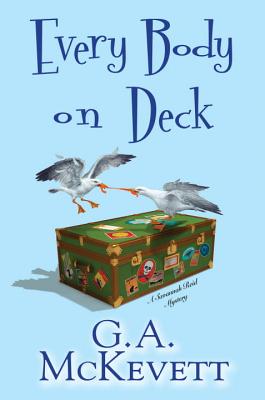 By G. A. Mckevett
Unavailable to Order
Hard to Find

This is book number 22 in the A Savannah Reid Mystery series.

Plus-sized P.I. Savannah Reid has no problem mixing business with pleasure—especially if that means a free trip while on the job. But when a gruesome murder rocks the boat, Savannah may finally be in over her head…

Nothing satisfies Savannah’s soul like nabbing bad guys—except maybe indulging in a juicy novel. So when famed mystery writer Natasha Van Cleef invites the Moonlight Magnolia Detective Agency on an Alaskan cruise in exchange for some personal protection, Savannah is instantly onboard with the idea. The voyage goes smoothly—at least, until Natasha and her husband flee the ship without explanation and get killed in a suspiciously explosive crash . . .

Awash in regret, Savannah and the MM crew won’t return home to San Carmelita until they expose whoever caused the fatal “accident.” But Savannah and her team have their work cut out for them when they discover that Natasha’s life was far more dramatic than any of her bestsellers. Not only was her marriage and literary career splattered with bad blood, but the author also had a crazed fan tracking her every move. With suspects and clues flooding in by the boatful, it’s all hands on deck as Savannah rushes to seize the murderer before she lands herself in hot water next . . .

PRAISE FOR G.A. MCKEVETT AND THE SAVANNAH REID MYSTERIES

KILLER REUNION
“Series fans will gobble this up.” —Publishers Weekly

BURIED IN BUTTERCREAM
“A wonderful edition to the series.” —Suspense Magazine

CORPSE SUZETTE
“Savannah’s as feisty as ever.” —Kirkus Reviews

MURDER A LA MODE
“Added to a well-plotted mystery, the very funny depiction of a different side of reality television makes Murder á la Mode a delight.” —Mystery Scene

G.A. McKevett is the author of the acclaimed Savannah Reid mystery series. Also writing under the name Sonja Massie, she has authored over 60 books ranging from cozy mysteries, to historical romances, to nonfiction works on the history of Ireland. Her earthy humor and fast-paced plots delight her fans, while critics applaud her offbeat characterizations and incisive observations on human nature. Irish by ancestry, she has lived in Toronto, Ireland and Los Angeles, but now resides in New York. Readers can visit her online at www.SonjaMassie.com.