History of the Atchison, Topeka and Santa Fe Railway (Hardcover) 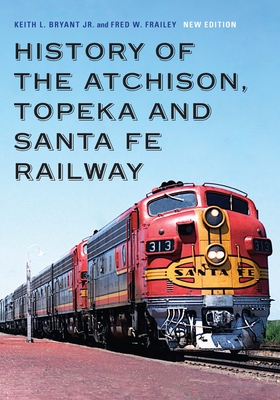 Cyrus K. Holliday envisioned a railroad that would run from Kansas to the Pacific, increasing the commerce and prosperity of the nation. With farsighted investors and shrewd management, the Atchison, Topeka and Santa Fe Railway grew from Holliday’s idea into a model of the modern, rapid, and efficient railroad. There were many growing pains early on, including rustlers, thieves, and desperadoes as well as the nineteenth century’s economic and climatic hardships. The railroad eventually extended from Chicago to San Francisco, with substantial holdings in oil fields, timber land, uranium mines, pipelines, and real estate.

This is the first comprehensive history of the iconic Atchison, Topeka and Santa Fe Railway, from its birth in 1859 to its termination in 1996. This volume discusses the construction and operation of the railway, the strategies of its leaders, the evolution of its locomotive fleet, and its famed passenger service with partner Fred Harvey. The vast changes within the nation’s railway system led to a merger with the Burlington Northern and the creation of the BNSF Railway.

An iconic railroad, the Santa Fe at its peak operated thirteen thousand miles of routes and served the southwestern region of the nation with the corporate slogan “Santa Fe All the Way.” This new edition covers almost twenty-five more years of history, including the merger of the Santa Fe and Burlington Northern railroads and new material on labor, minorities, and women on the carrier along with new and updated maps and photographs.

​Keith L. Bryant Jr. is a professor emeritus of history at the University of Akron. He is the author of five books, including Culture in the American Southwest: The Earth, the Sky, the People. Fred W. Frailey was a writer for Trains magazine for four decades and is the author or coauthor of six books about railroads, including Twilight of the Great Trains. He has been a writer or editor for the Chicago Sun-Times and Kansas City Star newspapers and for U.S. News & World Report and Kiplinger's Personal Finance magazines.

"The totality of Bryant and Frailey's work impresses upon the reader just how much solid leadership and exceptional vision are required in the creation and management of a giant undertaking like the ATSF. Cyrus Holliday would be proud of where his vision ultimately led and the important impact it has had on the development of the United States."—Mark Janzen, Nebraska History

"If you want an interesting look at railroading plus the social, financial, and political times over 130 years of America, consider this well-researched and documented book."—Stan Moore, Denver Posse of Westerners

“Readers will enjoy this comprehensive history of the Santa Fe, one covering more than 125 years. This wonderfully detailed book allows readers to gain a real feeling for this railroad and fills an enormous void in the literature of railroad company histories.”—H. Roger Grant, Kathryn and Calhoun Lemon Professor of History at Clemson University

“This is the best-documented book-length history of the Santa Fe Railway. Keith Bryant is a longtime historian of American railroading, and his collaborator, Fred Frailey, is widely regarded as one of the foremost observers of the modern industry. The history is presented chronologically and is well organized. It is accessible for a popular audience, even as it exhibits high standards of scholarship.”—Peter A. Hansen, longtime editor of Railroad History and correspondent for Trains magazine