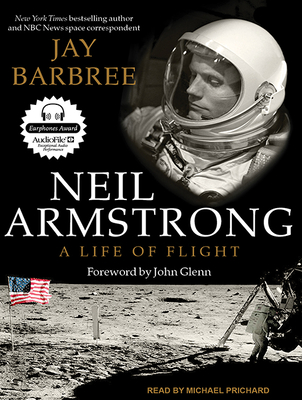 Much has been written about Neil Armstrong, America's modern hero and history's most famous space traveler. Yet shy of fame and never one to steal the spotlight, Armstrong was always reluctant to discuss his personal side of events. Here for the first time is the definitive story of Neil's life of flight he shared for five decades with a trusted friend-Jay Barbree. Barbree writes about Neil's three passions-flight, family, and friends. This is the inside story of Neil Armstrong from the time he flew combat missions in the Korean War, to when he saved his Gemini 8 by flying the first emergency return from Earth orbit, to when he flew Apollo 11 to the moon's Sea of Tranquility. Through his friendship with Neil and his dedicated research, Barbree brings us the most accurate account of his friend's life, the book he and the famed astronaut planned together for twenty years.

In the course of his 55-year career with NBC News, Jay Barbree is the only reporter to have covered all 166 American astronaut flights and moon landings. He received an Emmy for his coverage of the first walk on the moon, broke the cause of the Challenger accident, and still covers space for NBC. He was also the lead writer for the "New York Times" bestseller "Moon Shot" with astronauts Alan Shepard, Deke Slayton, and Neil Armstrong.

Michael Prichard is a professional narrator and stage and film actor who has played several thousand characters during his career. An Audie Award winner, he has recorded well over five hundred books and has earned several "AudioFile" Earphones Awards. Michael was also named a Top Ten Golden Voice by "SmartMoney" magazine.