Dead in the Water (Welcome Back to Scumble River) (Mass Market) 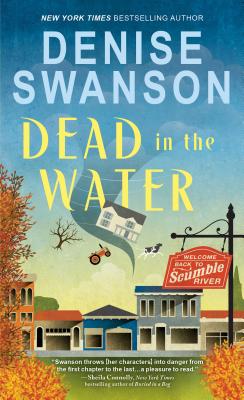 This is book number 1 in the Welcome Back to Scumble River series.

New York Times bestselling author Denise Swanson returns to the beloved town of Scumble River and its quirky townsfolk with Dead in the Water. First in a newly revamped cozy mystery series, Dead in the Water is a gripping mystery that won't let you go until you've turned the last page.

A twister, a kidnapping, and a murder—oh my! Scumble River may never be the same.

Welcome back to Scumble River!

For school psychologist Skye Denison, there's certainly no place like home. When a violent tornado shakes up the small river town, she can't see how the community will ever recover—especially since town councilman Zeke Lyons appears to have perished in the twister.

But things get even worse for Skye when her police chief husband, Wally, disappears in the midst of investigating Zeke's death. Did Zeke really die in the storm, or was he the victim of an un-welcome murder? And could Wally be next on the criminal's hit list? As evidence arises pointing to foul play, Skye will have to jump into this seemingly dead-end investigation to save her husband and her town.

Denise Swanson is the New York Times bestselling author of the Scumble River mysteries, the Deveraux’s Dime Store mysteries, and the Chef-to-Go mysteries, as well as the Change of Heart contemporary romances. She has been nominated for RT Magazine’s Career Achievement Award, the Agatha Award, and the Mary Higgins Clark Award.

"It’s a pleasure for Swanson’s readers to welcome back her Scumble River characters, even though she throws them into danger from the first chapter to the last. A tornado, a corpse and a kidnapping make life in Scumble River challenging for Skye Denison-Boyd as she awaits the birth of her first child, but fans of Swanson’s series know she can handle it all. Swanson’s strongly drawn characters and vivid descriptions make this welcome return of her Scumble River series a pleasure to read." — Sheila Connolly, New York Times bestselling author of Buried in a Bog

"Rejoice, Scumble River fans! Skye and Wally and the whole gang are back—and Denise Swanson proves once again that she is among the top writers of the genre. With more twists and turns than a tornado—a real tornado!—Dead in the Water is fast-paced and fun, with a smart, savvy protagonist, some truly sinister villains, a suspenseful plot, and a delightfully satisfying ending. I can’t wait to visit Scumble River again!" — Kate Carlisle, New York Times bestselling author

"Based on this delightful entry, this cozy series should have a long, bright future." — Publishers Weekly

"Denise Swanson is one of my favorite cozy mystery authors and DEAD IN THE WATER is yet another hit from her. I love that Denise Swanson has remained true to the heart of the Scumble River characters and atmosphere in her reboot of the series. If you love quirky characters combined with a darned good cozy mystery, then don't hesitate to give DEAD IN THE WATER a try. You won't regret it!" — Fresh Fiction

"Always an enjoyable series, this is a timely tale considering all the storms and disasters the south and northwest have faced recently. It’s a good mystery and a great example of how people work together when trouble hits a whole town. " — Mysteryrat’s Maze - Kings River Life Magazine