Momotaro Xander and the Lost Island of Monsters (Paperback) 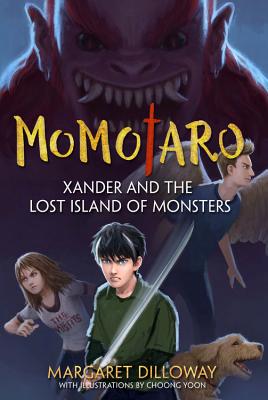 This is book number 1 in the Momotaro series.

Xander Miyamoto would rather do almost anything than listen to his sixth grade teacher, Mr. Stedman, drone on about weather disasters happening around the globe. If Xander could do stuff he's good at instead, like draw comics and create computer programs, and if Lovey would stop harassing him for being half Asian, he might not be counting the minutes until the dismissal bell.
When spring break begins at last, Xander plans to spend it playing computer games with his best friend, Peyton. Xander's father briefly distracts him with a comic book about some samurai warrior that pops out of a peach pit. Xander tosses it aside, but Peyton finds it more interesting.
Little does either boy know that the comic is a warning. They are about to be thrust into the biggest adventure of their lives-a journey wilder than any Xander has ever imagined, full of weird monsters even worse than Lovey. To win at this deadly serious game they will have to rely on their wits, courage, faith, and especially, each other. Maybe Xander should have listened to Mr Stedman about the weather after all. . . .

Sixth-grader Xander Miyamoto is focused on escaping his boring classroom and spending his spring break playing video games with his best friend, Peyton, as well as limited family time with his single-parent father and his Obachãn. Xander’s dad gave him a comic book about the famous hero, Musashi Miyamoto, but Xander doesn’t have much attention for it – or his teacher’s lecture about climate change, or the art he has been creating without conscious direction, or the mysterious figure observing him through the rain. All of these matters come into sharp focus when he and Peyton are suddenly drawn into a fantastic adventure with high-stakes personal consequences. Margaret’s updated story of Japan’s mythical warrior and the monstrous Oni is a great addition to the middle-grade fantasy genre.

Margaret Dilloway has been a writer ever since she learned how to write. In high school she was a California Arts Scholar in Creative Writing and she won a National Council of Teacher English writing award. She practiced writing in a variety of forms, such as being a theater critic and contributing editor for two weekly newspapers, doing technical writing, and playwriting, before publishing three critically acclaimed books for adults, How to Be an American Housewife, The Care and Handling of Roses with Thorns, and Sisters of Heart and Snow. Her research for this book included a trip to Japan and a samurai sword-fighting class. Margaret lives in southern California with her husband, three children, and a Goldendoodle named Gatsby. For more information, visit www.margaretdilloway.com. You can also follow her on Twitter @mdilloway.

Choong Yoon grew up in Seoul, South Korea. As a kid, he loved drawing animated characters and copying comic book panels. His passion for art grew until eventually he studied Fine Arts at Seoul National University. His fascination with narrative storytelling led him to transfer to the School of Visual Arts in New York, where he learned illustration. After graduating Choong began working as a freelance illustrator of books and comic books. He lives in New York City. More of his work can be seen at www.choongyoon.com.