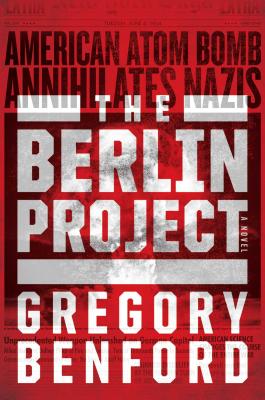 By Gregory Benford
Unavailable to Order
Hard to Find

New York Times bestselling author Gregory Benford creates an alternate history about the creation of the atomic bomb that explores what could have happened if the bomb was ready to be used by June 6, 1944.

Karl Cohen, a chemist and mathematician who is part of The Manhattan Project team, has discovered an alternate solution for creating the uranium isotope needed to cause a chain reaction: U-235.

After convincing General Groves of his new method, Cohen and his team of scientists work at Oak Ridge preparing to have a nuclear bomb ready to drop by the summer of 1944 in an effort to stop the war on the western front. What ensues is an altered account of World War II in this taut thriller.

Combining fascinating science with intimate and true accounts of several members of The Manhattan Project, The Berlin Project is an astounding novel that reimagines history and what could have happened if the atom bomb was ready in time to stop Hitler from killing millions of people.

Gregory Benford is a physicist, educator, and author. He received a BS from the University of Oklahoma and a PhD from the University of California, San Diego. Benford is a professor of physics at the University of California, Irvine, where he has been a faculty member since 1971. He is a Woodrow Wilson Fellow and a Visiting Fellow at Cambridge University. He has served as an advisor to the Department of Energy, NASA, and the White House Council on Space Policy. He is the author of over twenty novels, including In the Ocean of the Night, The Heart of the Comet (with David Brin), Foundation’s Fear, Bowl of Heaven (with Larry Niven), Timescape, and The Berlin Project. A two-time winner of the Nebula Award, Benford has also won the John W. Campbell Award, the British Science Fiction Award (BSFA), the Australian Ditmar Award, and the 1990 United Nations Medal in Literature. In 1995 he received the Lord Foundation Award for contributions to science and the public comprehension of it. He has served as scientific consultant to the NHK Network and for Star Trek: The Next Generation.

“Physics and politics, engineering and imagination, “The Berlin Project” has them all. No one has ever been better than Mr. Benford at expressing the sheer excitement of new science and the human tension of making a case, on which the future of the world depends.

“Let’s not think that there aren’t other decisions being made now, or not made now, on which our future depends. The answers depend on the science, yes, but also on the salesmanship. You have to sell the Moon, and Mars and the stars, to the politicians and the public. And if you don’t get it right . . . there will be consequences. That’s why sci-fi is not just for fans.”

“Through an informed exploration of what might have been, The Berlin Project provides a unique and darkly enthralling perspective on the events underpinning the advent of the atomic age.”
— – Scientific American

“In this intriguing alternate history thriller that speculates on the road not taken in the U.S.’s frantic path toward developing an atomic bomb during WWII…En route to that deployment, Benford brings to life all the heavy hitters involved in the Manhattan Project, such as Enrico Fermi, Leo Szilard, and Robert Oppenheimer.”
— – Publishers Weekly

"Karl Cohen is working under Harold Urey as a physics research assistant at Columbia University, where their discoveries bring them into the circle known as the Manhattan Project. In this alternate history (illustrated with historical photographs), Karl, being in the right place at the right time, moves up the timetable on the making of the first atomic bomb. Rather than targeting the Japanese city of Hiroshima on August 6, 1945, the first “little boy” is deployed June 5, 1944, on Berlin. Physicist and best-selling author Benford (Timescape) keeps most of his narrative solidly grounded in historical facts but not overwhelmingly so, and his engaging and compelling characters (all real people) are easy to connect with. While pondering what might have been, this insightful work provides a sobering look at how fragile the whole process of building an atomic weapon really was."

“One of the hallmarks of science fiction is asking "What if?" IN fact, the entire subgenre of alternate history is based on it. Gregory Benford's exciting alternate WWII thriller The Berlin Project posits a scenario in which the atomic bomb was ready to be deployed one year early, in the summer of 1944 – thanks to a scientist with the Manhattan Project who discovers a new way to cause a powerful chain reaction. How would the war have changed? Find out in the fast-paced story.”
— – Kirkus Review

“Master of SF Greg Benford delivers a taut thriller that pivots off of a spectacular twist of history: scientist Karl Cohen, working on the Manhattan Project during World War II, has a brilliant idea that speeds up development—and the first atomic bomb is ready a year earlier, in summer of 1944, when it could strike a decisive early blow against the Nazis. Laced with real science delivered in easily-absorbed, creative ways, the plot combines espionage, politics, and the “what if” thrill of imagining a world where Hitler was stopped in his tracks nearly a year earlier, as Cohen is forced out of his comfort zone and into the field.”
— – Tor.com

“The author does a marvelous job of blending political thriller, spy novel, and science fiction.”
— -- The New York Journal of Books