All the Plagues of Hell (Heirs of Alexandria #6) (Hardcover) 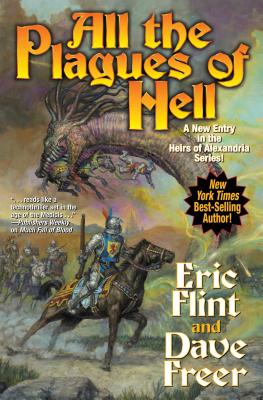 Orkise is loose. The snake-god of plague has been awakened by Lucia del Maino, the bastard daughter of the recently overthrown duke of Milan, Phillipo Visconti. With the venomous magic of Orkise at her command, Lucia plots to marry and then murder the usurper who now rules Milan, the condottiere Carlo Sforza—known to friend and foe alike as the Wolf the North.

Other trouble is brewing as well. Sforza has his own bastard, Benito Valdosta, who is returning to Venice after having conquered the Byzantine empire. Benito has a score to settle with his father, and he will have the help of his half-brother Marco, who is the embodiment of ancient Etruria’s mighty Winged Lion of St. Mark.

Adding further to Sforza’s predicament, yet another power has entered the fray. The terrifying sorcerer Count Mindaug has decided to settle in Milan. Will he ally with Sforza, or oppose him? Either will bring trouble, for if Mindaug aids the usurper he will arouse the fury of the Holy Roman Empire and the Knights of the Holy Trinity. Both of those great forces have sworn to destroy Mindaug and anyone who shelters him.

On his side, Sforza has only the skill and cunning of his physician, Francisco Turner—who is on good terms with the Valdosta brothers and may be able to neutralize Venetian hostility. But even if he can, will that be enough to save the Wolf of the North? For out there in the countryside of northern Italy, Orkise is uncoiling all the plagues of hell.

About All the Plagues of Hell:
“. . . a compelling tale of political, military, and magical conflict . . .”—Booklist

“Another engaging alternate history from a master of the genre.”—Booklist

“. . . an old-style police-procedural mystery, set in 17th century Germany. . . . the threads . . . spin together . . . to weave an addictively entertaining story. . . . a strong addition to a fun series.”—Daily News of Galveston County

“This alternate history series is … a landmark…”—Booklist

About A Mankind Witch, by Dave Freer:
“Good characterization, ripsnorting action and an ingenious plot make this a feast. . .”
—Publishers Weekly (Starred Review)

Eric Flint is a modern master of alternate history fiction, with more than three million books in print. He’s the author/creator of the multiple New York Times best-selling Ring of Fire series, starting with first novel 1632. With David Drake, he has written six popular novels in the “Belisarius” alternate Roman history series, and with David Weber, he has collaborated on 1633 and 1634: The Baltic War and latest Honorverse series entry Cauldron of Ghosts. Flint's latest Ring of Fire novel is 1637: The Polish Maelstrom. Flint was for many years a labor union activist. He lives near Chicago, Illinois.