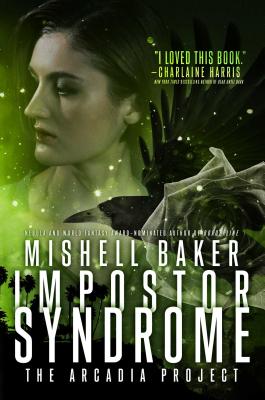 This is book number 3 in the The Arcadia Project series.

In the third book of the Nebula Award–nominated Arcadia Project series, which New York Times bestselling author Seanan McGuire called “exciting, inventive, and brilliantly plotted,” Millie Roper has to pull off two impossible heists—with the fate of the worlds in the balance.

Three months ago, a rift between agents in London and Los Angeles tore the Arcadia Project apart. With both fey Courts split down the middle—half supporting London, half LA—London is putting the pieces in place to quash the resistance. But due to an alarming backslide in her mental health, new LA agent Mille Roper is in no condition to fight.

When London’s opening shot is to frame Millie’s partner, Tjuan, for attempted homicide, Millie has no choice but to hide him and try to clear his name. Her investigation will take her across the pond to the heart of Arcadia at the mysterious and impenetrable White Rose palace. The key to Tjuan’s freedom—and to the success of the revolution—is locked in a vault under the fey Queen’s watchful eye. It’s up to Millie to plan and lead a heist that will shape the future of two worlds—all while pretending that she knows exactly what she’s doing…

Mishell Baker is the author of the Nebula and World Fantasy Award Finalist Borderline, which was also a Tiptree Honor book, as well as the second and third books in The Arcadia Project, Phantom Pains and Impostor Syndrome. She is a 2009 graduate of the Clarion Science Fiction and Fantasy Writers’ Workshop, and her short stories have appeared in Daily Science Fiction, Beneath Ceaseless Skies, Redstone Science Fiction, and Electric Velocipede. She has a website at MishellBaker.com and frequently Tweets about writing, parenthood, mental health, and assorted geekery at @MishellBaker. When she’s not attending conventions or going on wild research adventures, she lives in Los Angeles with her husband and children.

"Borderline is worldbuilding at its most original...I loved this book."
— Charlaine Harris, New York Times bestselling author of DEAD UNTIL DARK, on BORDERLINE

"Smart, snappy, fast, fantastic. You will not be sorry you read this."
— Seanan McGuire, New York Times bestselling author of the October Daye series, on BORDERLINE

"A fast-paced story of high costs laced with humor that goes from light-hearted to scathing with the flip of a coin...navigates the borderlands of friendship and enmity, trust and betrayal, with shrewd and unrelenting grace."
— NPR, on BORDERLINE

"Baker’s consistent, caring integration of the realities of disability into the narrative, makes Borderline one of the most purely respectful portrayals of people with disabilities that I’ve ever had the pleasure of reading, and that in turn makes it an excellent launch to a very promising urban fantasy series."
— Publishers Weekly STAFF PICK, on BORDERLINE

"Mishell Baker’s new Arcadia Project series is off to a thrilling and glamorous start with Borderline...Baker has given her audience urban fantasy at its finest—visceral and real in its sense of space, and dancing on the uncanny edges of our vision...Borderline is dark and creeping and smart as a whip."
— Tor.com, on BORDERLINE

"Borderline [is] a strange, fast-paced, and surprisingly dark tale about magic, madness and mystique...Despite the engaging plot, Millie’s character, and the complexities in the characters around her made the book a real page-turner for me...Immensely riveting, with unexpected influxes of depth."
— MuggleNet.com, on BORDERLINE

"Urban fantasy series often live of die on the strength of their protagonist, and by that measure, Mishell Baker has written one of the greats...Baker spins a fast-moving fantasy yarn while crafting fully formed characters, showing great compassion in her depiction of mental illness and alienation."
— B&N Sci-Fi and Fantasy blog, Bookseller picks, on BORDERLINE

"Boasting a truly unique heroine whose flaws only make her more compelling, Baker’s debut is an exciting entry into an imaginative new world."
— Booklist, on BORDERLINE

"Pure perfection...a smart, witty, and engrossing book that made me laugh-out-loud and hold my breath as I fell under its spell...Baker is on par with Elmore Leonard when it comes to mastery in the art of dialogue."
— SF Signal on BORDERLINE

"A quick-paced, engrossing read with a surprisingly genuine and realistic portrayal of mental illness and physical disability...successfully balances darkness, humor and wit, set against a creatively imagined world...Readers will be left excited for more."
— Romantic Times, on BORDERLINE

* "Everything readers think they know about both worlds will be upended by this enthralling installment."
— Publishers Weekly, STARRED REVIEW, on PHANTOM PAINS

"In her second outing, Baker expands on the rich world she created and adds new dimension to Millie, who remains a thoroughly appealing and complex heroine."
— Booklist, on PHANTOM PAINS

“Baker’s prose is a liquid line with light in it, that you can’t tell is gasoline until she touches it with a match…. Phantom Pains succeeds in being both seamlessly connected to Borderline and utterly its own ambitious project. I was constantly aware of being impressed with it while being absorbed by it – and I ended up loving it more than Borderline, which is saying something.”
— Lightspeed Magazine, on PHANTOM PAINS