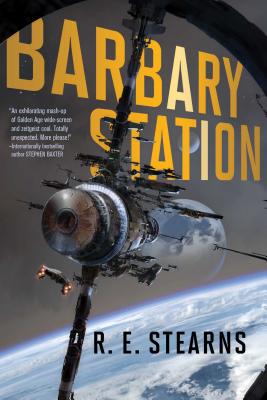 This is book number 1 in the Shieldrunner Pirates series.

Two engineers hijack a spaceship to join some space pirates—only to discover the pirates are hiding from a malevolent AI. Now they have to outwit the AI if they want to join the pirate crew—and survive long enough to enjoy it.

Adda and Iridian are newly minted engineers, but aren’t able to find any work in a solar system ruined by economic collapse after an interplanetary war. Desperate for employment, they hijack a colony ship and plan to join a famed pirate crew living in luxury at Barbary Station, an abandoned shipbreaking station in deep space.

But when they arrive there, nothing is as expected. The pirates aren’t living in luxury—they’re hiding in a makeshift base welded onto the station’s exterior hull. The artificial intelligence controlling the station’s security system has gone mad, trying to kill all station residents and shooting down any ship that attempts to leave—so there’s no way out.

Adda and Iridian have one chance to earn a place on the pirate crew: destroy the artificial intelligence. The last engineer who went up against the AI met an untimely end, and the pirates are taking bets on how the newcomers will die. But Adda and Iridian plan to beat the odds.

There’s a glorious future in piracy…if only they can survive long enough.

R.E. Stearns is the author of Barbary Station and Mutiny at Vesta. She wrote her first story on an Apple IIe computer and still kind of misses green text on a black screen. She went on to annoy all of her teachers by reading books while they lectured. Eventually she read and wrote enough to earn a master’s degree in curriculum and instruction from the University of Central Florida. She is hoping for an honorary doctorate. When not writing or working, R.E. Stearns reads, plays PC games, and references internet memes in meatspace. She lives near Orlando, Florida, with her husband, a computer engineer, and a cat.

"This book is good fun. I really enjoyed this, and I bet you will, too."
— Ann Leckie, Hugo and Nebula Award-winning author of Ancillary Justice

"Grabs you in chapter one and doesn't let go. This book is for everyone who ever wanted to be a space pirate."
— Mur Lafferty, Award-winning author of Six Wakes

"A super cool novel. It mixes unpredictable mysteries, a murderous AI, space battles, an awesome and fashionable Pirate Leader in Captain Sloane as well as a healthy dose of romance and found families...a blend of Die Hard and the Illuminae Files."
— Kirkus Reviews