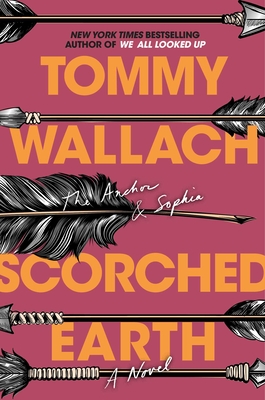 This is book number 3 in the The Anchor & Sophia series.

From the New York Times bestselling author of We All Looked Up comes the exciting conclusion to the “haunting…beautiful and heartbreaking” (School Library Journal) Anchor & Sophia trilogy, where the rules of humanity come to a head in the final battle between two warring cities.

In this thrilling conclusion to the Anchor & Sophia trilogy, the great war has finally begun. The Descendancy must fight for its survival against not only the Sophian army, but a Wesah nation newly galvanized by the Black Wagon Massacre. And four young people will once again find themselves at the center of the maelstrom.

Accused of a crime she didn’t commit, Paz Dedios is on the run from the law...and the man she loves.

Traumatized by the near-genocide of her people and the death of her lover, Athène is bent on revenge.

Newly reunited in the Anchor, Clive and Clover Hamill will struggle to come to terms with the reappearance of a ghost from the past.

Who will win the war for the future? And who will be left standing when it’s all over?

Tommy Wallach is the author of the Anchor & Sophia trilogy, Thanks for the Trouble, and the New York Times bestselling We All Looked Up, which has been translated into over a dozen languages. His writing has appeared in McSweeney’s, Tin House, Wired, and other magazines, and he is a MacDowell Fellow. He was signed to Decca Records as a singer-songwriter, and has independently released two full-length albums, including We All Looked Up: The Album, a companion record to his first novel. He currently lives in Los Angeles, where he recently opened up his first escape room, and is working on bringing his novels to various sorts of screens. Grok more at TommyWallach.com.

"A gratifying conclusion to this epic tale of self-discovery; a great fit for young adult collections everywhere."
— School Library Journal