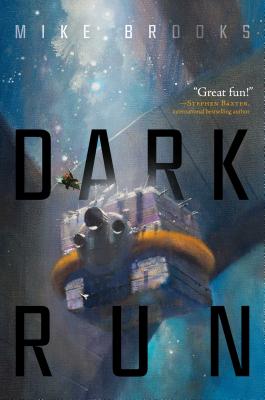 This is book number 1 in the Keiko series.

In this debut space epic, a crew of thieves and con artists take on a job that could pay off a lot of debts in a corrupt galaxy where life is cheap and criminals are the best people in it.

The Keiko is a ship of smugglers, soldiers of fortune, and adventurers travelling Earth’s colony planets searching for the next job. And they never talk about their past—until now.

Captain Ichabod Drift is being blackmailed. He has to deliver a special cargo to Earth, and no one can know they’re there. It’s what they call a dark run…And it may be their last.

Brooks turns in an enjoyable adventure that has all of the fast action and clever dialog fans of the genre look for, with well-drawn secondary characters who also have moments to shine. Suggest this debut to enthusiasts of caper plots and stories such as Chris Wooding’s Ketty Jay novels, and, of course, Firefly.
— Library Journal

"Dark Run is a fast paced smuggler story that delivers all the crooked and devious action you could ask for."
— SFBook Reviews