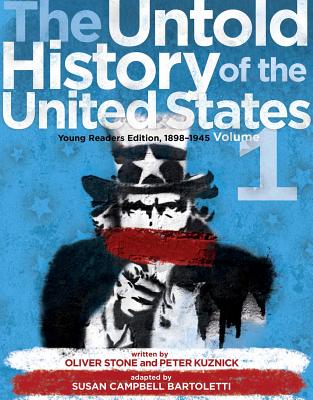 A people’s history of the American Empire, adapted for the next generation of young history buffs.

Adapted by Newbery Honor recipient Susan Campbell Bartoletti from the bestselling book (and companion to the Showtime documentary) The Untold History of the United States by Academy Award–winning director Oliver Stone and renowned historian Peter Kuznick, this first of four volumes presents young readers with a powerful and provocative look at the past century of American imperialism.

This is not the kind of history taught in schools or normally presented on television or in popular movies. This riveting young readers’ edition challenges prevailing orthodoxies to reveal the dark reality about the rise and fall of the American empire for curious, budding historians who are hungry for the truth. Based on the latest archival findings and recently declassified information, this four-volume series will come as a surprise to the vast majority of students and their teachers—and that’s precisely why these books are such crucial counterpoints to today’s history textbooks.

Complete with photos, illustrations, and little-known documents, this first of four volumes covers crucial moments in American history from the late nineteenth century to the dropping of the atomic bomb on Hiroshima and Nagasaki.

* STARRED REVIEW * “The darker side of the "American Century," recast for younger audiences… the authors also point to other turning points and near misses that are rarely if ever part of standard school curricula.”
— Kirkus Reviews


“[This book] contains more mind-blowing information, insightful analysis, and revisionist theorizing than all of my other 2014 favorites put together. I see America’s history far differently after reading this volume, the first of four… there are places where grownups prefer that students avoid reading anything that could be construed as questioning the greatness and moral authority of the United States. But for those of us who want to be enlightened and enlighten others, this is a must-have.”
— Richie Partington