Vault of Shadows (The Nightsiders #2) (Paperback) 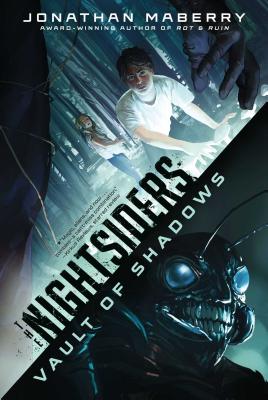 By Jonathan Maberry
$9.89
On Our Shelves Now

This is book number 2 in the The Nightsiders series.

Milo must choose between risking his life to save both the human and magical universes—or to live and save only his own—in the explosive and fast-paced follow-up to the first novel in the Nightsiders series, which Kirkus Reviews called “the perfect mix of science fiction and magic” in a starred review.

After joining forces with the magical Nightsiders and surviving a trip to the enemy Bugs’ Hive ship, Milo Silk still has a lot to fear.

The Huntsman has pledged a revenge worse than death on Milo, a group of nefarious fairies are bent on taking back Earth, and zombie-like holo-men are trapping humans for the Bugs to take. Even more unsettling is that the Witch of the World has disappeared and a mysterious boy is haunting Milo’s dreams in her stead.

But none of these threats compare to what may happen to the world if the humans and the Nightsiders don’t unite to fight for each other.

"A solid series installment;a must-own where there are fans of the first 'Nightsiders' adventure."
— School Library Journal

* "While this particular quest does little toforward the overall story, it serves to expand the world, deepen thecharacters, and raise the stakes on their seemingly impossible war. Magic,aliens, and now…zombies—a can't-miss combination."
— Kirkus, STARRED REVIEW