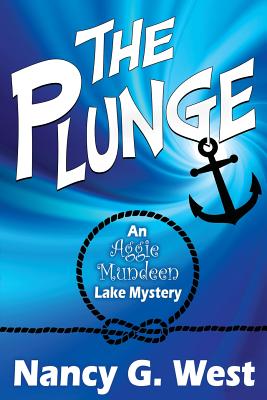 When Aggie Mundeen accompanies San Antonio Detective Sam Vanderhoven on a weekend getaway to Lake Placid, she thinks it's going to be fun in the sun. What could be better than caretaking a friend's cottage on the Guadalupe River in Central Texas? Never mind that Sam intends to discretely investigate the theft of that friend's boat...

Unfortunately, the weather has plans of its own. Buckets of rain and gusting winds roil the lake, turning the peaceful Guadalupe into an angry, raging river. As darkness descends, lightning reveals two people arguing on a dock across the river. When lightning flashes again, they are gone. Did Aggie and Sam witness an accident? A drowning? A murder?

The Plunge sweeps readers along with the threat of looming disaster, helpless before an untamable force, where sleuthing takes a back seat to survival...

Nancy G. West is an award-winning suspense author and the creator of the Aggie Mundeen Mysteries. Every book in the series has either won or been nominated for an award. The Plunge launches Aggie in a new direction.