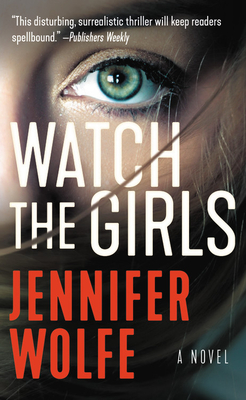 By Jennifer Wolfe
$7.99
On Our Shelves Now

Watch the Girls is a campy, creepy and fun debut thriller. Liv Hendricks is a 32-year old former child star whose youngest sister disappeared 15 years ago. After Liv loses her job on a reality TV series, she posts a video on a crowdfunding site, offering to investigate an unsolved missing person case, chosen by the highest contributor. Her highest donor is Jonas Kron, a legendary horror film director, whose bizarre, highly disturbing films have a rabid cult following. He wants Liv to investigate a series of disappearances in the California small town where he shot his films. The chapters alternate between Liv’s investigation and the events surrounding her sister’s disappearance 15 years ago, and the unfolding narrative is by turns comical and very dark. Wolves, fires, sacrificial rituals, hidden cameras, sibling rivalry, stage mothers, revenge, and buried memories all feature in this highly original thriller, and the shocking, twisted and totally unbelievable finale is a fitting homage to horror films, reality TV and the devastating power of online video and social media. Highly recommended for fans of dark thrillers, campy horror films and refreshingly inventive storytelling.

Fame and obsession collide in this darkly twisted novel featuring a former Hollywood starlet with a devastating secret in this psychological thriller People magazine praises as "fast-paced and involving", from an incredible new voice in suspense.

I've been watched all my life. I'm used to being stared at. Observed. Followed.
SOMEONE IS WATCHING
Washed up teen star Liv Hendricks quit acting after her beloved younger sister inexplicably disappeared following a Hollywood party gone wrong. Liv barely escaped with her life, and her sister was never heard from again. But all this time, someone's been waiting patiently to finish what was started...

FOUR MISSING GIRLS
Now fifteen years later, broke and desperate, Liv is forced to return to the spotlight. She crowdfunds a webseries in which she'll pose as a real-life private detective--a nod to the show she starred on as a teen. When a mysterious donor challenges her to investigate a series of disappearances outside a town made famous by the horror movies filmed there, Liv has no choice but to accept.

FOLLOW THE WHITE WOLF
Liv is given a cryptic first clue: Follow the white wolf. And now a darker game is about to begin. Through social media, someone is leaving breadcrumbs to follow. As Liv makes increasingly disturbing discoveries, her show explodes in popularity. A rapt internet audience is eager to watch it all--perhaps even at the cost of Liv's own life...

Filled with provocative twists and turns as the line between plot and reality blurs in this inventive tour-de-force from breakout writer Jennifer Wolfe.
Incredible Acclaim for Watch the Girl:
"Fast-paced and involving." -- People

"Sibling rivalry and Hollywood obsessions collide...Fast-paced and fraught with suspense, WATCH THE GIRLS unravels like a perfect summer-night movie." -- BookPage
"Has all the nightmare fuel of great horror movie camp mixed with an absorbing mystery....There is no denying WATCH THE GIRLS is "nervously-eat-an-entire-box-of-cookies-without-realizing-it" good." -- Shelf Awareness
"A devastating novel that evokes Ingmar Bergman and David Lynch....This disturbing, surrealistic thriller will keep readers spellbound." -- Publishers Weekly

"Debut author Wolfe has created a compelling, sympathetic character in Liv...[This is] a psychologically dark ride through a twisted underworld of fame and desperation, a journey that will keep readers guessing until the shocking ending. " -- Booklist

Jennifer Wolfe worked as a phlebotomist, a fiction writing teacher, a copywriter, and ran a concert venue before quitting to move to Los Angeles, where she performed odd jobs in the film industry for a decade. She now divides her time between Los Angeles and Portland, Oregon. Watch the Girls is Jennifer's debut thriller. She also publishes young adult fiction under the name Jennifer Bosworth.

"Sibling rivalry and Hollywood obsessions collide...Fast-paced and fraught with suspense, WATCH THE GIRLS unravels like a perfect summer-night movie."—BookPage

"It's a fascinating set-up, and while it seems like it may be nothing more than a fun romp, don't let looks deceive you. This takes dark and unexpected turns, culminating in an ending fit for its own horror movie. Liv is a compelling protagonist with a distinct voice--snarky and vulnerable, tough and persevering-and the book as a whole takes clever swipes at the Hollywood culture that has pervaded our lives. I'm anxious to see where Wolfe takes us next-either with this character or the next. Frankly, I'm willing to follow her anywhere."—Crimespree Magazine


"WATCH THE GIRLS is one of those books--it gets under your skin and stays
with you long after you've devoured the last page. It's the perfect
dark, chilling thriller for the age of social media and ubiquitous
reality TV that's anything but real. Jennifer Wolfe's damaged heroine
toes the thin and ever-blurry line between truth and fake Hollywood
glitz, right up until the devastating conclusion."—Nina Laurin, author of Girl Last Seen

"Make no mistake: Wolfe's got the goods. Timely, harrowing, and vividly
imagined, WATCH THE GIRLS is a wild ride with style to burn."—Chris Holm, Anthony Award winning author of The Killing Kind

"Twisty, tense, and addictive, WATCH THE GIRLS is like a great horror flick, a classic mystery, and an edgy piece of social commentary-all wrapped up into one dark, delicious package. Jennifer Wolfe is a huge new talent. Welcome to the book everyone will be reading this summer."—Brad Parks, author of Closer Than You Know

"[A] campy debut thriller...with [a] twisty and twisted ending."—Kirkus Reviews


"Wolfe moves one step further and investigates voyeurism itself--both as a problem, and as a manifestation of curiosity....Playful and creepy...blurs boundaries between the real and the surreal."—CrimeReads.com

"Debut author Wolfe has created a compelling, sympathetic character in
Liv, a scared, lonely woman who acts jaded and tough but grieves over a
missing sister of her own. The author takes readers on a psychologically
dark ride through a twisted underworld of fame and desperation, a
journey that will keep readers guessing until the shocking ending."—Booklist