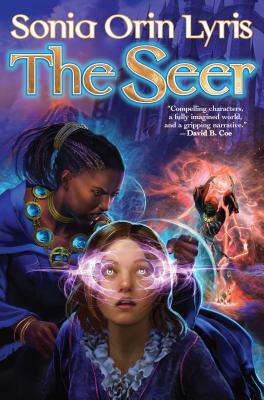 The debut of a stunning new talent. A poor, young woman rises to the heights of a crumbling empire, where she must speak hard truth to power in order to save a world from chaos. Everybody Wants Answers. No One Wants the Truth. The Arunkel Empire has stood a thousand years, forged by wealth and conquest, but now rebellion is stirring on the borders and treachery brews in the palace halls. Elsewhere, in a remote mountain village, a young mother sells the prophesies of her sister, Amarta, in order to keep them and her infant child from starving. It's a dangerous game when such revelations draw suspicion and mistrust as often as they earn coin. Yet Amarta's visions are true. And often not at all what the seeker wishes to hear. Now in a tapestry of loyalty, intrigue, magic, and gold, Amarta has become the key to a ruler's ambitions. But is she nothing beyond a tool? As Amarta comes into her own as a seer, she realizes she must do more than predict the future. She must create it. About The Seer:
"Solidly entertaining sword-and-sorcery adventure . . ."--Publishers Weekly "Compelling characters, a fully imagined world, and a gripping narrative: The Seer announces Sonia Lyris as a new and exciting voice in epic fantasy. I highly recommend this novel, and I look forward to her next."--David B. Coe, author of best-selling Winds of the Forelands series "The Seer is something extremely rare these days: a fantasy which is complex, complete, so intricate that you feel the picture goes on far, far beyond the parts of it which are in the book. There is a wonderful depth to it, and the characters and the setting in which the characters find themselves (both horrific and fascinating) made it compelling reading. The story's separate threads left me wondering how the author could possibly weave them together. She did so brilliantly, it was masterful and I was very impressed."--Dave Freer, author of the critically acclaimed Dragon's Ring series

Author Sonia Orin Lyris's fiction includes fantasy, horror, mainstream, SF, software documentation, and business plans. She has a shodan in Aikido, can wield a range of weapons, and dances Argentine tango and Blues. She has raised an emu from a hatchling, been kicked and spat on by llamas, and been pounced on by a cougar cub - not all at the same time. She lives in the Pacific Northwest. Her web site is: lyris.org