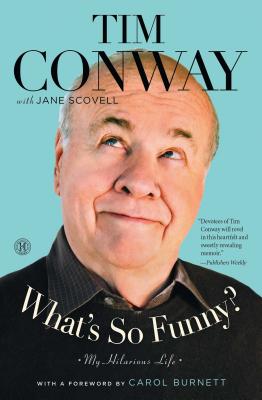 Six-time Emmy Award-winning funny man Tim Conway—best known for his roles on The Carol Burnett Show—offers a straight-shooting and hilarious memoir about his life on stage and off as an actor and comedian.

In television history, few entertainers have captured as many hearts and made as many people laugh as Tim Conway. What’s So Funny? follows Tim’s journey from life as an only child raised by loving but outrageous parents, to his tour of duty in the army, to his ascent as a national star.

Conway’s often-improvised humor, razor-sharp timing, and hilarious characters have made him one of the funniest and most authentic performers to grace the stage and studio. As Carol Burnett, who also provides an intimate foreword to the book, has said, “there’s no one funnier” than Tim Conway.

What’s So Funny? shares hilarious accounts and never-before-shared stories of behind-the-scenes antics on McHale’s Navy and The Carol Burnett Show as well as his famous partnerships with entertainment greats like Harvey Korman, Don Knotts, and Dick Van Dyke; and his friendships with stars like Betty White and Bob Newhart.

Filled with warmth, humor, and heart, What’s So Funny will delight and inspire fans everywhere.

Tim Conway (1933—2019) starred on The Carol Burnett Show for eleven years. He won six Emmys and was in the Comedy Hall of Fame. He went to Bowling Green State University for eleven years (he was a very slow learner). Tim was in the army (ours) for two years, protecting Seattle from "the Red Menace" and was in McHale's Navy for three years. His ambition was to be a jockey, but at his weight even the horses asked him to get off. He has seven children and was married to his lovely wife Charlene for thirty-five years.

Carol Burnett is a highly acclaimed actress known for her roles on stage and screen, most notably The Carol Burnett Show. She has been honored with twelve People’s Choice Awards, eight Golden Globes, six Emmy Awards, The Kennedy Center Honors, and the Mark Twain Prize for Humor.

"I couldn't put the book down. It was very clever of Tim to put glue on each page. Seriously, I loved it."
— Bob Newhart

"What Frank Sinatra was to music Tim Conway is to comedy. He is inventive, creative, and imaginative. This book should be in everyone's library along with Anna Karenina, War and Peace, and all of my CD's."
— Steve Lawrence

"Tim is not only a good friend but a terrific writer. His book has all the qualities of another Mark Twain. Settle back in a chair and enjoy the writing of Tim Conway. It’s worth reading because he mentions me!"
— Don Rickles

"I grew up religiously watching the brilliance of Tim Conway. This book not only confirmed that fact but showed how his positive attitude and unending humor navigated the chaos of this sometimes insane business. Thank you for the inspiration Mr. Conway."
— Tony Hale

“Devotees of Tim Conway will revel in this heartfelt and sweetly revealing memoir. . . . This is a warm-hearted tribute to Conway’s professional and personal life, with endearing peeks behind the television camera.”
— Publisher's Weekly