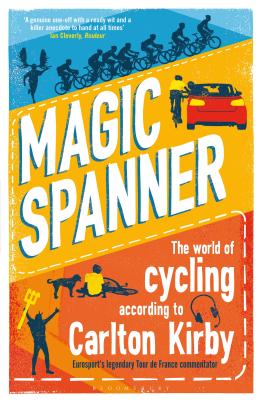 By Carlton Kirby, Robbie Broughton
Unavailable to Order
Out of Print

Written with a candid and amusing authority that comes from over 25 years of sports commentary with Eurosport, Carlton Kirby gives an insider's view of competitive cycling delivered in the inimitable, humorous, and at times outspoken style for which he has become globally famous.

Peppered with hilarious anecdotes of life on the road with Tour legend Sean Kelly, Kirby indulges in some soap-box moments to lambast his various bugbears, from crazy spectators in mankinis and lazy Italian monks to the more serious issues of rider safety, team strategies and questionable ethics.

With his mix of expert opinion and trademark wit, Carlton covers the funny, the serious, the heartbreaking, and the more bizarre moments of professional cycling.

Carlton Kirby is the principle cycling commentator for Eurosport and has covered the Tour de France, the Giro d'Italia, and Vuelta a Espana among many other cycling races. He has worked in broadcasting for over thirty years over which time he has accumulated legions of loyal fans who are drawn to his witty and, at times, excitable style. Known by some as the 'language mangler' and for his 'Kirbyisms' (occasional strange musings about not just cycling but the very fabric of life), loyal listeners have set up a Twitter account of his humorous comments: Things Carlton Says, @saidcarlton.

“Carlton is never lost for words, whether commentating or writing. A genuine one-off with a ready wit and a killer anecdote to hand at all times” —Ian Cleverly, Rouleur

“Carlton Kirby is no ordinary cycling commentator, so it is not surprising that this very entertaining book is no ordinary Grand Tour on a bicycle. A very enjoyable journey for everyone” —Phil Liggett MBE, NBC Tour de France commentator

“Carlton's commentary never fails to bring a bike race to life, he has to be the Dalai Lama of all TV commentators” —Mick Bennett, Tour of Britain Race Director

“I've heard all these stories before, but it was great to read them in silence...” —Dan Lloyd, GCN presenter and winner of the 2008 Vuelta Extremadura

“Kirby pulls back the curtain to reveal behind-the-scenes antics from cycling's Grand Tours, laying bare the hilarious, leftfield and downright bizarre moments that covering the sport brings.” —The Herald