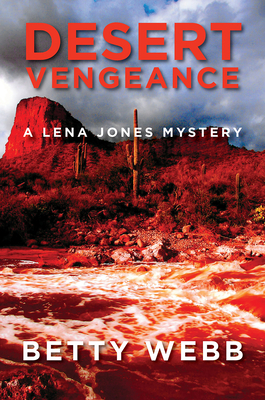 This is book number 9 in the Lena Jones series.

When the man who raped Scottsdale PI Lena Jones when she was a nine-year-old foster child is released from prison, Lena is waiting for him in the parking lot - with a big knife. "Papa" Brian Wycoff survives their meeting, but the next day, his wife, who knew about his crimes but did nothing to stop him - in fact enabled him - is found dead in their Apache Junction home, shot through both eyes. Terrified he will be next, Wycoff, violating his parole, flees north to the small town of Black Canyon City, taking shelter in an RV on his brother-in-law's small ranch. A couple of days later, he is found tortured to death, eight horizontal marks burned into his flesh. One for each of his victims?

Suspicion first falls upon Lena, who has trailed Wycoff to Black Canyon City to make sure he doesn't come near any other children. When the local authorities arrive to question her, she admits to having been tempted to kill her former foster father, but someone beat her to the punch. Suspicion then falls on Wycoff's other victims, the now-grown men and women he abused when they were still in his care, and on the mothers of the children who went missing before his arrest.

When Lena takes up the case, more to protect one of the mothers who has been arrested than to find the real killer, her conscience is torn. Does a serial child rapist, a pedophile also implicated in the disappearance of several children, really deserve justice? That choice might not be left up to Lena when members of a local group, Parents of Missing Children, start working to prevent her investigation from succeeding. How far will they go to make sure she fails?