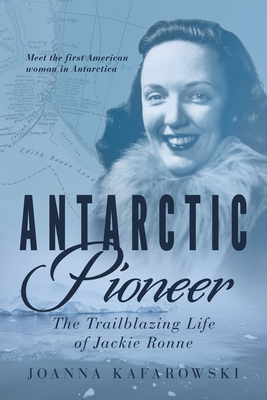 Jackie Ronne reclaims her rightful place in polar history as the first American woman in Antarctica.

Jackie was an ordinary American woman whose life changed after a blind date with rugged Antarctic explorer Finn Ronne. After marrying, they began planning the 1946-1948 Ronne Antarctic Research Expedition. Her participation was not welcomed by the expedition team of red-blooded males eager to prove themselves in the frozen, hostile environment of Antarctica.

On March 12, 1947, Jackie Ronne became the first American woman in Antarctica and, months later, one of the first women to overwinter there.

The Ronne Antarctic Research Expedition secured its place in Antarctic history, but its scientific contributions have been overshadowed by conflicts and the dangerous accidents that occurred. Jackie dedicated her life to Antarctica: she promoted the achievements of the expedition and was a pioneer in polar tourism and an early supporter of the Antarctic Treaty. In doing so, she helped shape the narrative of twentieth-century Antarctic exploration.

Joanna Kafarowski, Ph.D., is passionate about researching and writing about the lives of women in polar history. She is the author of The Polar Adventures of a Rich American Dame: A Life of Louise Arner Boyd, the first comprehensive biography of a female Arctic explorer. She lives in Victoria, British Columbia.