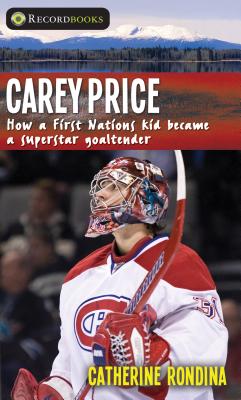 Twenty years ago, Carey Price was flying hundreds of miles across the country so he could play on the nearest organized hockey team. Today, he is the highest-paid goalie in the NHL. But he's never forgotten where he started.

The son of an NHL draftee and the chief of the Ulkatcho First Nation, Carey got his start on skates as a toddler. The natural athlete went on to become the top amateur player in Canada in 2002, getting drafted fifth overall by the Montreal Canadiens three years later. Now one of the most recognizable figures in hockey, Carey credits his success to his community of Anahim Lake, where hard work and commitment often face off against remoteness and cost. Throughout his incredible career, he's taken every opportunity possible to encourage all young people, especially those who share his Indigenous background, to follow their dreams.

CATHERINE RONDINA is a writer, educator and library assistant. Her books for children have received numerous honours including, the Silver Birch Award, the Hackmatack Award and the Teacher's Choice Award. She lives in Richmond Hill, Ontario.