Death of a Ghost (A Hamish Macbeth Mystery #32) (Mass Market) 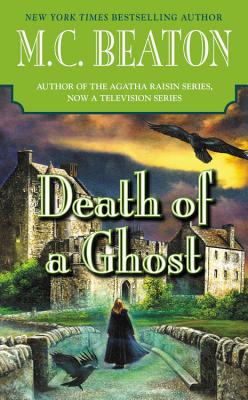 This is book number 32 in the A Hamish Macbeth Mystery series.

Sergeant Hamish Macbeth--Scotland's most quick-witted but unambitious policeman--returns in M.C. Beaton's new mystery in her New York Times bestselling series. From the author of the Agatha Raisin series.

When Police Sergeant Hamish Macbeth hears reports of a haunted castle near Drim, he assumes the eerie noises and lights reported by the villagers are just local teenagers going there to smoke pot or, worse, inject themselves with drugs. Still, Hamish decides that he and his policeman, Charlie "Clumsy" Carson, will spend the night at the ruined castle to get to the bottom of the rumors once and for all.

There's no sign of any ghost...but then Charlie disappears through the floor. It turns out he's fallen into the cellar. And what Hamish and Charlie find there is worse than a ghost: a dead body propped against the wall. Waiting for help to arrive, Hamish and Charlie leave the castle just for a moment--to eat bacon baps--but when they return, the body is nowhere to be seen.

It's clear something strange--and deadly--is going on at the castle, and Hamish must get to the bottom of it before the "ghost" can strike again...

M. C. Beaton has won international acclaim for her New York Times bestselling Hamish Macbeth mysteries. The BBC has aired 24 episodes based on the series. Beaton is also the author of the bestselling Agatha Raisin series, which will air as an eight-episode dramatic series on Sky1, starring Ashley Jensen. She lives in the Cotswolds with her husband. For more information, you can visit MCBeaton.com.

"Longing for escape? Tired of waiting for Brigadoon to materialize? Time for a trip to Lochdubh, the scenic, if somnolent, village in the Scottish Highlands where M. C. Beaton sets her beguiling whodunits featuring Constable Hamish Macbeth."—New York Times Book Review

"Hamish Macbeth is that most unusual character, one to whom the reader returns because of his charming flaws. May he never get promoted."—New York Journal of Books

"Macbeth is the sort of character who slyly grows on you."—Chicago Sun-Times

"Fabulous...as usual, a real gem... a fast-paced story that includes tricks and plotlines galore. From murder to drugs to romance, Beaton provides many new characters while also bringing back some old favorites. Hamish, as always, is a riveting character that sees many things the others cannot, and when the bodies start piling up, Hamish's talents bring everything to a shocking, thrilling close."
—Suspense Magazine

"With residents and a constable so authentic, it won't be long before tourists will be seeking Lochdubh and believing in the reality of Hamish Macbeth as surely as they believed in Sherlock Holmes."—Denver Rocky Mountain News

"Atmospheric...Few fictional detectives are more appealing than fey, redheaded Hamish with his taste for unsuitable women and no desire to leave his peaceful Scottish Highland home. Series fans and newcomers alike will enjoy spending time with Hamish and the beguiling inhabitants of Lochdubh."—Publishers Weekly

"Fans of the handsome Highlander will delight in his continuing penchant for the wrong women and his utter lack of ambition despite his superior detecting skills, which this complex case puts on handsome display."—Kirkus Reviews

"As entertaining as ever...a page turner...[MC Beaton] is a treasure."—Dreams & Nightmares