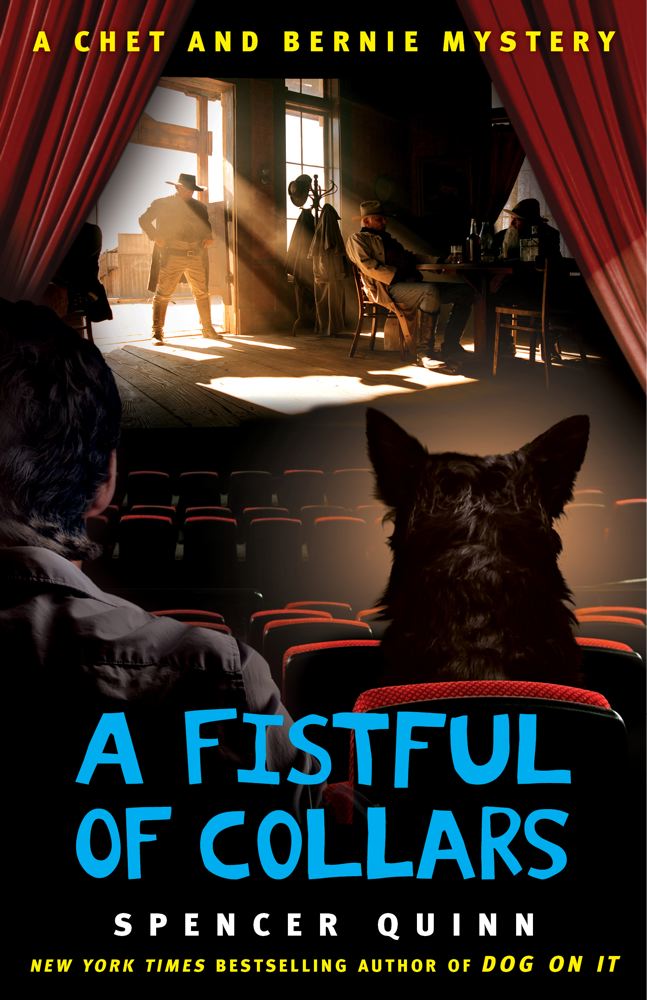 By Spencer Quinn
Unavailable to Order
Hard to Find

This is book number 5 in the The Chet and Bernie Mystery Series series.

Chet the dog and Bernie, his private investigator companion, are back in the New York Times bestselling mystery series as they investigate a movie star with a shady past.

Everyone’s favorite detective team returns in a new adventure as canine narrator Chet and his human partner P.I. Bernie Little find that Hollywood has gone to the dogs.

Hoping to bring some Tinseltown money to the Valley, the mayor lures a movie studio to town to shoot their next production, a big-budget Western in the classic tradition. The star is none other than ruggedly handsome—and notoriously badly behaved—Thad Perry. When the mayor decides that someone needs to keep an eye on Thad so that he doesn’t get into too much trouble, Bernie and Chet are handpicked for the job. The money is good but something smells fishy, and what should have been a simple matter of babysitting soon gets more complicated—especially when they discover that Thad has a mysterious connection to the Valley that nobody wants to talk about. What kind of secret could Thad have left behind when he went to Hollywood to seek fame and fortune? The only people who might know the answer have a bad habit of turning up dead before they can talk.

As Bernie’s relationship with his longtime girlfriend Suzie goes long-distance, and Chet’s late-night assignations appear to have resulted in an unexpected dividend, it’s all our two sleuths can do to keep Thad and his motley entourage of yes-men, handlers, and hangers-on in their sights. Worst of all, Thad is a self-proclaimed cat person, and his feline friend Brando has taken an instant dislike to Chet.

Like the winning books before it, this fifth book in the series combines a top-notch mystery with genuine humor and a perceptive take on the relationship between human and dog that will stay with you long after the case is solved.

Spencer Quinn is the bestselling author of eight Chet and Bernie mystery series, as well as the #1 New York Times bestselling Bowser and Birdie series for middle-grade readers. He lives on Cape Cod with his wife Diana—and dogs Audrey and Pearl. Keep up with him by visiting SpenceQuinn.com.

Praise for A Fistful of Collars

“Between Chet’s insightful and humorous takes on human events, the fast-paced plot, and the wealth of fascinating secondary characters, this is a fine entry in a not-to-be-missed series."
— Booklist

"Amusing, intelligent and exciting... A fun romp through a genre that's been around for decades but in the right hands (or paws) still has the power to entertain us."
— Cesar's Way

"Once again, Quinn…effectively uses a dog narrator while avoiding the sentimentality that marks many animal-centered cozies."
--Publishers Weekly

“You would think that by the fifth series title, Quinn might have run out of ideas and quips—he hasn't. Fans of Janet Evanovich or Donna Andrews will enjoy Quinn's humorous and entertaining mysteries.”
--Library Journal

“Chet, who continues as narrator in this exciting fifth installment of the series…always gets it right in the end.”
--Kirkus Reviews

"This delightful buddy tale... will have no problem engaging and entertaining readers just discovering this series." --Shelf Awareness

"Even cat lovers will howl with delight."
--USA Today

"Pulls the reader along as if on a leash."
--Booklist

“These books… are as skillfully rendered as they are clever and fully worthy of the attention of any reader."
— The Denver Post