A Once Crowded Sky: A Novel (Hardcover) 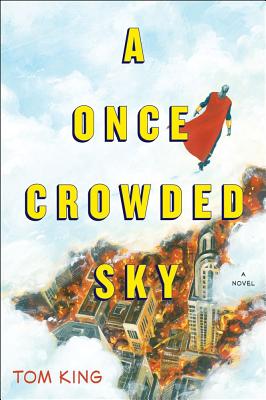 A tour de force debut novel from a former CIA counter-terrorism officer, A Once Crowded Sky fuses the sensibility of bombastic, comic-book-style storytelling with modern literary fiction to bring to life a universe of super men stripped of their powers, newly mortal men forced to confront danger in a world without heroes.


The superheroes of Arcadia City fight a wonderful war and play a wonderful game, forever saving yet another day. However, after sacrificing both their powers and Ultimate, the greatest hero of them all, to defeat the latest apocalypse, these comic book characters are transformed from the marvelous into the mundane.

After too many battles won and too many friends lost, The Soldier of Freedom was fine letting all that glory go. But when a new threat blasts through his city, Soldier, as ever, accepts his duty and reenlists in this next war. Without his once amazing abilities, he's forced to seek the help of the one man who walked away, the sole hero who refused to make the sacrifice--PenUltimate, the sidekick of Ultimate, who through his own rejection of the game has become the most powerful man in the world, the only one left who might still, once again, save the day.

Tom King worked for the counterterrorism unit at the Central Intelligence Agency following the events of 9/11. Before the CIA, he worked for DC Comics and Marvel. He lives in Washington, D.C. Visit AOnceCrowdedSky.com.

“An exciting post-millennial conflict allegory, which echoes the terror of Alan Moore’s writing for Watchmen while sidestepping out of its shadow. ”
— The A.V. Club

“An original, assured debut . . . Impossible to put down.”
— Library Journal

“Beyond postmodern, complex in conception . . . relevant to the graphic-novel, video-gaming generation.”
— Kirkus Reviews

“A more literary - and literate - novel, making effective use of the present tense to add urgency to the tale, and creates characters that are agreeably complex. ‘A Once Crowded Sky’ also benefits from the black-and-white comic book-style illustrations by Tom Fowler that help readers visualize these unfamiliar heroes.”
— Tulsa World

“King presents us with a story that subtly questions our ideas of humanity and heroism. The tale moves quickly and fluidly… an incredible page-turner.”
— The Charleston Post and Courier

“Ultimately a story of wonder, and of redemption. . . . At its core, this is a story about humanity, told from the perspective of simultaneously the most and the least human of us all.”
— Spencer Daily Reporter, IA

“In a summer swimming in comic book inspired blockbusters, perhaps the most visionary tale in a generation won’t be found in either a multiplex or the local comic book shop but rather nestled in the shelves of your local book retailer."
— Fandompost.com

“King's story revolves around the only superpowered hero left in the world—the one who stayed behind with his wife when all the others sacrificed themselves to save the world. As a strange new violent terrorism begins destroying parts of cities at random, PenUltimate needs to decide whether he wants to be a hero again…an enjoyable postmodern superhero story.”

“Masterfully developed, incorporating versions of the archetypal superhero into a fantastic modern prose story. I loved the author's entertaining writing, the occasional humor, and the connections to myth, history, and literature. I breezed through a lot of the book, not wanting to put down such a well-written, epic fantasy story. By the way, I don't think I've ever read a comic book in my life…”

“A good and quick read for anyone looking to enjoy some good fiction…even if you aren’t into comics whatsoever you can enjoy this book.”

“A fascinating concept…it kept me spellbound from page 1 right to the end.”