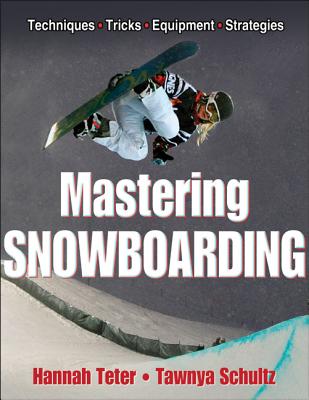 Ever watched professional snowboarders and wanted to pull some of the same tricks they make look so simple? If so, Mastering Snowboarding is the resource for you.

Olympic gold medalist and X Games champion Hannah Teter teams up with expert snowboard writer Tawnya Schultz to bring you the techniques and tricks used by the pros. They’ll take you inside the sport and provide in-depth coverage of snowboarding equipment, including how to select and customize a board to fit your style and needs. Packed with the coolest tricks, expert advice, and secrets from the pros, this full-color guide is the only resource you need in order to own the slopes.

Whether you are a recreational rider or a seasoned vet about to drop in to the halfpipe, Mastering Snowboarding has you covered. Add this one-of-a-kind resource to your library and you’ll soon be ready to put your new skills on display.

Hannah Teter is one of the greatest female snowboarders in the history of the sport, having earned numerous awards and honors since she began competitive snowboarding at the age of 15, when she placed fourth in her first world cup halfpipe event. She has represented the United States twice in Winter Olympic Games, medaling both times in the halfpipe. She earned the gold medal in 2006, for which the United States Olympic Committee named her the USOC Sportswoman of the Year, and the silver medal in 2010. She has achieved six FIS Snowboard world cup victories and earned bronze at the 2005 FIS world championships. Competing in the Winter X Games, Hannah has medaled six times, winning the gold for the superpipe in 2003 and bronze in 2004, 2005, 2009, 2010, and 2012.

Hannah’s snowboarding record is legendary, and her mainstream celebrity acknowledgments include a 2006 ESPN ESPY Award for Best Female Action Sport Athlete and a 2010 appearance in Sports Illustrated’s famed swimsuit issue. She is active in philanthropy and is committed to helping the world’s poor. She founded Hannah’s Gold in 2008, and the charity donates profits from her family’s Vermont maple syrup sales to the village of Kirindon, Kenya, to help provide clean drinking water, farming opportunities, and schooling for the village. In 2010 she launched Sweet Cheeks, a charity that donates 40 percent of proceeds to Children International. Hannah often donates her prize money from competitions to her charity. Hannah was awarded a VH1 Do Something Award in the category of Do Something Athlete.

Tawnya Schultz is the founder and editor of Tahoe Snowboard magazine, which recently celebrated its third season of publication. She is a contributor to Snowboard magazine (for which she has managed three women's annuals) and is a weekly writer for the burtongirls website. Tawnya has written for Cooler Mag, Transworld Snowboarding, and Snowboarder magazine while also running her own website. She is the author of a children’s snowboarding book titled Sammy the Shredder, which tells the story of Sammy a snowboarding bear.

“Hannah has not only won Olympic gold and silver medals, but she has also lifted women’s snowboarding to the next level during her 10-year pro career. Mastering Snowboarding lays out a clear path so you too can reach your potential, feel great, and have fun."

“Mastering Snowboarding is a great tool to help snowboarders at any level hone their skills on the mountain. I highly recommend it!”