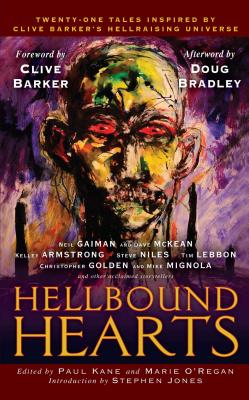 Clive Barker's iconic masterpiece The Hellbound Heart, the novella adapted into the film Hellraiser, unleashed a new mythology of horror, brilliantly conceived and born of the darkest imagination. Now, enter this visionary world -- the merciless realm of the demonic Cenobites -- in this collection of stories inspired by The Hellbound Heart. Featured here is the graphic work "Wordsworth," from bestselling author Neil Gaiman and artist Dave McKean, who unlock an explicit way to violate innocence -- one torturous puzzle at a time.... New York Times bestselling author Kelley Armstrong logs on to a disturbing website for gamers, where the challenge is agonizing, and the solution beyond painful. When his father disappears, an Oxford student returns to his family's mansion, where a strange mechanism in the cellar holds a curious power, in a haunting illustrated work by Christopher Golden and Mike Mignola.

Clive Barker is the bestselling author of over twenty novels and collections, including Weaveworld, Imajica, and Galilee. He regularly shows his art in Los Angeles and New York, and produces and directs for both large screen and small. He lives in California with his partner.

Neil Gaiman is an award-winning author of books, graphic novels, short stories, and films for all ages. His titles include Norse Mythology, The Graveyard Book, Coraline, The View from the Cheap Seats, The Ocean at the End of the Lane, Neverwhere, and the Sandman series of graphic novels, among other works. His fiction has received Newbery, Carnegie, Hugo, Nebula, World Fantasy, and Eisner awards. The film adaptation of his short story “How to Talk to Girls at Parties” and the second season of the critically acclaimed, Emmy-nominated television adaptation of his novel American Gods will be released in 2018. Born in the UK, he now lives in the United States.