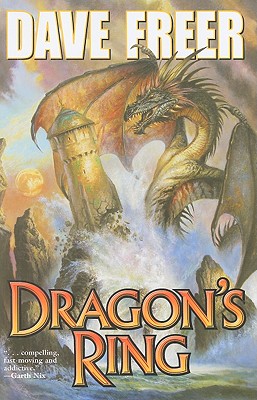 Only a Human Mage Can Save Their World Now--and the Last Remaining Mage is Conspiring With a Rogue Dragon to Destroy It All Fantasy Adventure by the Co-Author of Pyramid Scheme and Pyramid Power. Tasmarin is a place of dragons, a plane cut off from all other worlds, where dragons can be dragons and humans can be dinner. It's a place of islands, forests, mountains and wild oceans, filled with magical denizens. Fionn--the black dragon--calmly tells anyone who will listen that he's going to destroy the place. Of course he's a joker, a troublemaker and a dragon of no fixed abode. No one ever believes him. He's dead serious. Others strive to refresh the magics that built this place. To do so they need the combined magics of all the intelligent species, to renew the ancient balance and compact. There is just one problem. They need a human mage, and dragons systematically eliminated those centuries ago. Their augury has revealed that there is one, and they seek her desperately. Unfortunately, she's fallen in with Fionn, who really doesn't want them to succeed. He has his own reasons and dark designs. The part he hadn't worked out is that she will affect his plans too. Chaos, roguery, heroism, theft, love, kidnapping, magic and war follow. And more chaos. "Good characterization, ripsnorting action and an ingenious plot make this a feast for sword and sorcery fans."--Publishers Weekly (Starred Review) on Dave Freer's A Mankind Witch "There are great pleasures in life: a cold beer on a hot summer day, an Irish coffee in mid-winter, and a Dave Freer adventure story any time of the year."-Eric Flint, New York Times best-selling creator of the Ring of Fire series.

Dave Freer is an Ichthyologist turned author because he'd heard that the spelling requirements were simpler. They lied about that. He lives in a remote part of KwaZulu-Natal, South Africa, with his wife and chief proof-reader, Barbara, four dogs and four cats, two sons (Paddy and James) and just at the moment no shrews, birds, bats or any other rescued wildlife. His first book--The Forlorn (Baen)--came out in 1999. Since then he has co-authored with Eric Flint (Rats, Bats and Vats, The Rats, the Bats and the Ugly, Pyramid Scheme and Pyramid Power, The Sorceress of Karres) and with Mercedes Lackey and Eric Flint (The Shadow of the Lion, This Rough Magic, The Wizard of Karres) as well as writing various shorter works. Besides working as a Fisheries Scientist for the Western Cape shark fishery, running a couple of fish farms, he has worked as a commercial diver and as a relief chef at several luxury game lodges. Yes: he can both cook and change diapers. (No man ever really gets tired of danger sports.) He spent two years as a conscripted soldier along the way, so he can iron too. His interests are rock climbing (he's still good at it), diving, flyfishing (he's still bad at it), fly-tying, wine-tasting and the preparation of food, especially by traditional means--smoking and salting, all the good unhealthy things.