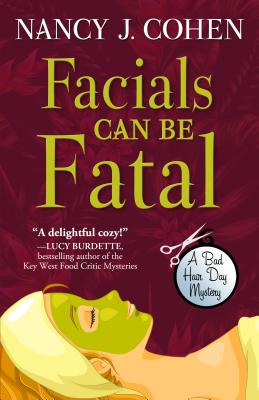 During the frenzy of the December holidays, the last thing salon owner Marla Vail needs is a dead body slathered in a green facial mask at her new day spa. The victim, Valerie Weston, had been a major donor for Friends of Old Florida, a nonprofit historic building preservation society. Marla's stylists are scheduled to work backstage at their upcoming gala fashion show, but Val's demise might put a crimp in their plans.

Hoping to salvage her reputation, Marla determines to track down the suspects. Although Val had been well liked by most people, she may have stumbled onto secrets that others would kill to keep. As more bodies pile up, Marla races to uncover the clues. What are the connections between a greedy land developer, a dress designer whose husband may have links to the Asian mob, a mortician who might be involved in the human hair trade, and members of the nonprofit group's board of directors? Are the latter as dedicated to their cause as they d like Marla to believe, or do they have their own self-interests at heart?

Sparks are sure to fly when this smart stylist joins forces with her sexy detective husband to solve a decades-old mystery that includes a secret journal, pirate tales, and shipwrecks along the Florida coast. With the rollercoaster excitement, you might need a trip to the day spa to relax. But beware of body treatments that have nothing to do with herbal scrubs and hot stone massages and everything to do with murder.