The Second Book of Ore: Waybound (The Books of Ore #2) (Hardcover) 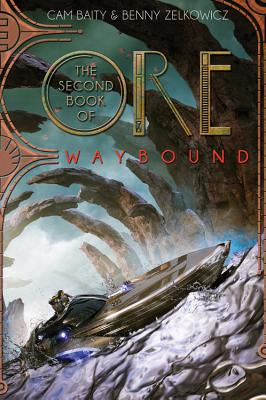 This is book number 2 in the The Books of Ore series.

Cam Baity is an Emmy Award winning animator, and his short films have screened around the world, including at Anima Mundi in Brazil and the BBC British Short Film Festival. His credits include major motion pictures like Team America: World Police and The SpongeBob SquarePants Movie, and popular television shows such as Robot Chicken and Supermansion. Benny Zelkowicz studied animation at CalArts and made the award winning film, The ErlKing. He directed and starred in the BBC/CBC animated series Lunar Jim, and worked on The LEGO Movie as well as several TV shows including Robot Chicken and Moral Orel. Learn more about Cam and Benny at www.CamandBenny.com.

"Cam Baity & Benny Zelkowicz have created a wholly original, mind-blowing, unique world filled with both peril and beauty. The mettle is in the metal in this universe. I found myself traveling through it in constant awe while getting lost in the wild imaginations of these two gifted writers."—D.J. MacHale

"The imaginative world, whirlwind adventure, tense emotional stakes, and some well-placed laughs put this first in a planned series in the same stack as Harry Potter and Percy Jackson."—Booklist

"An edgy, fast-moving, Seuss-ian political allegory for a new generation."—Kirkus

"The Foundry's Edge explores how the exploitation and destruction of one group unfairly advances another. A fine addition to any middle grade collection."—School Library Journal