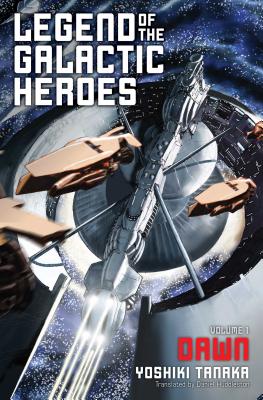 It’s the master tactician of the ruthless Galactic Empire versus the Free Planets Alliance in Japan’s greatest space opera epic!

In the thirty-sixth century, humanity has conquered the galaxy and colonized countless star systems. The Galactic Empire, modeled along Prussian lines, and the democratic Free Planets Alliance are at war, and the fate of every human being in the universe hangs in the balance. This classic Japanese space opera, adapted into a legendary anime, is finally available in English for the first time.

The “golden brat” Reinhard von Lohengramm, a military prodigy and admiral of the Galactic Empire, has ambitions beyond protecting the borders or even defeating the empire’s enemies. He seeks to overthrow the old order and become a truly absolute—yet benevolent—dictator. His rival, the humble Yang Wen-li of the Free Planets Alliance, wishes to preserve democracy even if he must sacrifice his political ideals to defeat the empire. Their political and military battles play out over a galactic chessboard in an epic saga fifteen centuries in the making!

Yoshiki Tanaka is a novelsit.