Jack and the Geniuses: At the Bottom of the World (Hardcover) 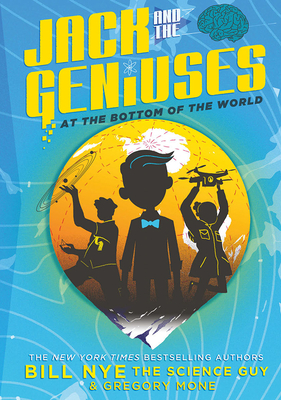 Bill Nye and Gregory Mone teaming up to write a middle grade book about adventure and science is a dream come true! Jack, Ava, and Matt are three orphans who live on their own; but they are no ordinary orphans—they are geniuses! When they enter a science competition and travel to Antarctica, they not only come across fascinating inventions and science, but uncover a deep mystery of a missing scientist. Told through the perspective of Jack, who is not quite as scientific as his foster siblings, readers of all kinds can enjoy solving the mystery. Nye and Mone have written a story full of adventure, science and heart, complete with scientific facts, explanations, and experiments in the back of the book!

A contest to find a better way to create clean drinking water turns into a mystery when one of the scientists goes missing. Luckily, Jack and his genius siblings are on the case in this New York Times bestselling series from Bill Nye and Gregory Mone!

Jack and his foster siblings, Ava and Matt, are not your typical kids—they’re geniuses. Well, Ava and Matt are. Ava speaks multiple languages and builds robots for fun, and Matt is an expert astronomer and math whiz. As for Jack, it’s hard to stand out when surrounded by geniuses all the time.

Things get more complicated when the trio starts working for Dr. Hank Witherspoon, one of the world’s leading scientists. They travel to Antarctica with Hank for a prestigious award ceremony—but they quickly find that not all is as it seems: A scientist has gone missing. It’s up to Jack, Ava, and Matt to find her . . . and discover who’s behind it all.

In the Jack and the Geniuses series, readers join Jack, Ava and Matt on adventures around the world to tackle some of science's biggest challenges, including new ways to create clean drinking water, to generate clean and renewable energy, and to extend information access to the entire planet. Each book in the series includes cool facts about the real-life science found in the story and a fun DIY project.

Gregory Mone is the author of several bestselling works of fiction and nonfiction for both children and adults. He is a contributing editor at Popular Science and an award-winning science writer. A graduate of Harvard College, he lives with his family on Martha’s Vineyard.

"An adventure replete with both cool gadgets and working scientists of both sexes...The cast and plotline are strong... and two appendices fill in details about Antarctica and some of the episode’s techno wizardry. For inveterate geeks, there’s even a relevant science project!"
— Booklist

"Fast-paced enough to engage even reluctant readers, informative without being didactic, and entertaining: a solid series start."
— Kirkus

"The scientists are diverse, the educational and entertainment values are high, and there’s even good end matter (a fact vs. fiction section on what was real in the novel, cool information about Antarctica, and a science experiment), making this a promising series start."
— Bulletin of the Center for Children’s Books

"Readers will appreciate Jack’s humor and candor...although he may not be an official “genius,” intelligence takes many forms. This fast-paced, science-themed mystery is a strong first outing, sure to leave readers awaiting this team’s next adventure."
— Publishers Weekly

"This is a fantastic start to a new series that includes STEM concepts, facts, and excitement about the scientific world."
— School Library Connection