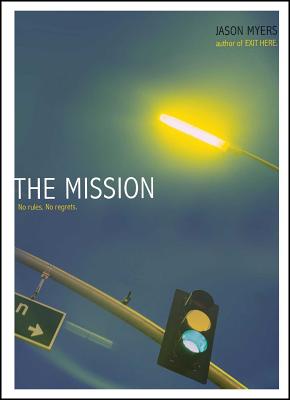 Wake up and do something!

Kaden Norris's life is shattered when his older brother -- his best friend and hero -- is killed in Iraq. All Kaden has left of Kenny is a letter, urging him to break away from his sheltered life and to go to San Francisco to visit his cousin, James.

Kaden is blown away, as James introduces him to a life filled with drugs, sex, and apathy. He goes from extreme high to extreme low, having no idea what to expect. And when Kaden uncovers secrets about his family that have been kept from him for years, his entire world comes crashing down. This may not be the trip his brother had envisioned for him, but it's one Kaden will never forget.

Jason Myers is the author of five teen novels, including his debut, Exit Here., which became a cult classic. He lives in San Francisco, California. Find him online at JasonMyersAuthor.com or follow him on Twitter at @JasonMyersBooks.

When his older brother Kenny is killed in Iraq, fifteen-year-old Kaden Norris honors one of his last requests by flying to San Francisco to attend a book reading by Kenny's hero, Chuck Palahniuk. Kaden stays with his cousin James Morgan, another well-known author who is in his mid-thirties but parties hard and does all kinds of drugs with a much younger crowd. His girlfriend Caralie keeps a loose watch over Kaden, but he becomes enamored with the music and drug scene of San Francisco's radial youth culture. Before long, he is tossing back shots and doing lines of coke. He falls for Caralie, buys booze with a fake ID, gets into a street fight, loses his virginity, and discovers horrific family secrets all within a week. After an intense talk with James, Kaden returns to Dysart, Iowa, determined to live life by his own rules.

Disgustingly dirty crash pads, heavy metal talk, fashion reports, and references to Chuck Palahniuk's Fight Club scream "cool setting." But scenes of debahuchery crowd out deeper plot development that could garner empathy for Kaden and his problems. Like most teens, he is full of self-doubt and swayed by peer pressure, but his self-discovery happens too quickly to feel authentic. Saturated with F-bombs and other expletives, scenes of drug use, and gratuitous hook-up sex, this novel is not for everyone. Kids will love its 'in your face" attitude but it is not this generation's Catcher in the Rye.