The Higher Power of Lucky (Hardcover) 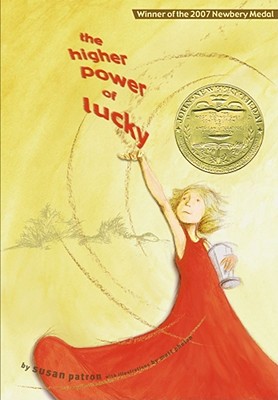 Believing that her French guardian is about to abandon her to an orphanage in the city, ten-year-old Lucky runs away from her small town with her beloved dog by her side in order to trek across the Mojave Desert in this Newbery Medal–winning novel from Susan Patron.

Lucky, age ten, can't wait another day. The meanness gland in her heart and the crevices full of questions in her brain make running away from Hard Pan, California (population 43), the rock-bottom only choice she has.

It's all Brigitte's fault -- for wanting to go back to France. Guardians are supposed to stay put and look after girls in their care! Instead Lucky is sure that she'll be abandoned to some orphanage in Los Angeles where her beloved dog, HMS Beagle, won't be allowed. She'll have to lose her friends Miles, who lives on cookies, and Lincoln, future U.S. president (maybe) and member of the International Guild of Knot Tyers. Just as bad, she'll have to give up eavesdropping on twelve-step anonymous programs where the interesting talk is all about Higher Powers. Lucky needs her own -- and quick.

But she hadn't planned on a dust storm.

Or needing to lug the world's heaviest survival-kit backpack into the desert.

Susan Patron specialized in Children's Services for 35 years at the Los Angeles Public Library before retiring in 2007, the same year her novel The Higher Power of Lucky was awarded the John Newbery Medal. As the library's Juvenile Materials Collection Development Manager, she trained and mentored children's librarians in 72 branches. Patron has served on many book award committees, including the Caldecott and Laura Ingalls Wilder Committees of the American Library Association. She is currently a member of the Advisory Board of the Society of Children's Book Writers and Illustrators.

Patron's previous books for children include the Billy Que trilogy of picture books; Dark Cloud Strong Breeze; and a chapter book, Maybe Yes, Maybe No, Maybe Maybe. All earned starred reviews, and the latter was named an ALA Notable book. The Higher Power of Luck will be translated into twelve foreign languages and has been optioned for a motion picture. Married to a rare book restorer from the Champagne region of France, Susan is working on the final book in the "Lucky" trilogy.

Matt Phelan's black-and-white illustrations first appeared in The Seven Wonders of Sassafras Springs by Betty G. Birney. His picture books include The New Girl...and Me and Two of a Kind, both written by Jacqui Robbins. Matt lives in Philadelphia, Pennsylvania.

* “Patron [is] a master of light but sure characterization and closely observed detail. A small gem.”—Kirkus Reviews, starred review

“Lucky is a true heroine.”—Booklist