The First Rule of Ten: A Tenzing Norbu Mystery (Paperback) 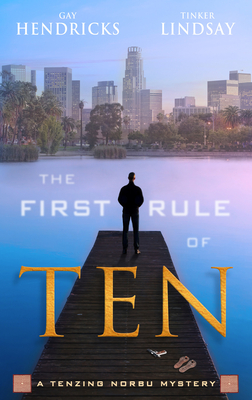 “Don't ignore intuitive tickles lest they reappear as sledgehammers.” —The first rule of Ten

Tenzing Norbu (“Ten” for short), an ex-monk and soon-to-be ex-cop, is a protagonist unique to our times. In The First Rule of Ten, we meet this spiritual warrior who is singularly equipped, if not occasionally ill-equipped, as he takes on his first case as a private investigator in Los Angeles. Growing up in a Tibetan Monastery, Ten dreamed of becoming a modern-day Sherlock Holmes. So when he was sent to Los Angeles to teach meditation, he joined the LAPD instead.

But as the Buddha says, change is inevitable; and ten years later, everything is about to change—big-time—for Ten. One resignation from the police force, two bullet-wounds, three suspicious deaths, and a beautiful woman later, he quickly learns that whenever he breaks his first rule, mayhem follows.

Set in the modern-day streets and canyons of Los Angeles, The First Rule of Ten is at turns humorous, insightful, and riveting-a gripping mystery as well as a reflective, character-driven story with intriguing life-lessons for us all.

Gay Hendricks, Ph.D., has served for more than 35 years as one of the major contributors to the fields of relationship transformation and body-mind therapies. Along with his wife, Dr. Kathlyn Hendricks, Gay is the co-author of many bestsellers, including Conscious Loving and Five Wishes. He is the author of 33 books, including The Corporate Mystic, Conscious Living, and The Big Leap. Dr. Hendricks received his Ph.D. in counseling psychology from Stanford. After a 21-year career as a professor of Counseling Psychology at the University of Colorado, he and Kathlyn founded The Hendricks Institute, which offers seminars worldwide.In recent years, Dr. Hendricks has been active in creating new forms of conscious entertainment. In 2003, along with movie producer Stephen Simon, he founded The Spiritual Cinema Circle, which distributes inspirational movies to subscribers in 70+ countries, www.spiritualcinemacircle.com. He has appeared on more than 500 radio and television shows, including The Oprah Winfrey Show and 48 Hours and is regularly featured on national stations like CNN and CNBC. Tinker Lindsay is an accomplished screenwriter, author, script consultant, and conceptual editor. A member of the Writer’s Guild of America, Independent Writers of Southern California, and Women in Film, she has worked in the Hollywood entertainment industry writing and developing feature films for over three decades. Her books include The Last Great Place and My Hollywood Ending. She graduated magna cum laude from Harvard University in English and American Language and Literature and completed a post-graduate course at Radcliffe College in Publishing Procedures. A practitioner and teacher of meditation, she can usually be found writing in her home office situated directly under the Hollywood sign.

Tibetan monk, turned LA cop, turned PI — it’s nothing less than one would expect from a successful relationship expert’s first mystery novel — and it’s a perfect choice to launch Hay House’s new mystery imprint, Visions. Ten is the book’s protagonist (the rules are his). He has a cat named Tank, an ex-girlfriend he calls "she-who-hates-cats", and he often chooses a cold beer instead of meditation to reduce stress. His spiritual insights run as a sub-theme in his mind, as he chases bad guys and looks for clues. He models himself after Sherlock Holmes (his childhood idol) and has a Dr. Watson style computer-jockey sidekick named Mike. The action begins when a casual visitor to Ten’s residence turns up dead. Just days after leaving the LAPD, Ten becomes immersed in unraveling the crime and adjusting to being an outsider to his former law-enforcement family. Subtly laced with drugs, sex, and ex-rockers, in addition to a compassionately rendered supporting cast, this one is a page turner with a broad potential audience. With more books already in the pipeline for the Tenzing Norbu series, customers will want to get to know this new-millennium Magnum/Rockford-style gumshoe as soon as possible. Tell them not to wait for the movie; this is a perfect post-holiday indulgence.
- Anna Jedrziewski New York, NY New Age Retailer(soon to be Retailing Insight)