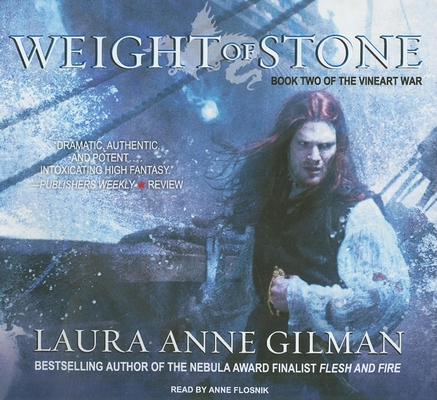 By Laura Anne Gilman, Anne Flosnik (Narrated by)
Unavailable to Order
Out of Print

This is book number 2 in the Vineart War (Audio) series.

Vineart student Jerzy and his new companions Ao and Mahault take to the sea, to gain time in which to figure out what to do after the disastrous events they left behind in the city-state of Aleppan. While at sea a magic-laced storm drives their ship to falter-only to be rescued by a surprising, ghost-driven ally. Called home and under close watch by the sternly pious Washers, Jerzy tries to let go of what he has learned and return to his formerly satisfying life as an apprentice at the House of Malech. But the shadows on the Lands Vin continue to darken, and neither he nor Vineart Malech can ignore them for long. Soon enough, Jerzy and his companions are reunited and given a task: find the source of the magic taint plaguing the Lands Vin so that the name of the House of Malech can be cleared of all wrongdoing. But when tragedy strikes, a simple, impossible mission becomes a voyage of vengeance.

Laura Anne Gilman is the author of the Cosa Nostradamus books (the Retrievers series and the Paranormal Scene Investigations series), the young adult trilogy Grail Quest, and two Buffy the Vampire Slayer novels.

Anne Flosnik is an accomplished multi-award-winning British actress who has garnered two "AudioFile" Earphones Awards, an ALA Award, and three Audie Award nominations. Her narration of "Little Bee" by Chris Cleave was chosen as one of the Best Audiobooks of the Year 2009 by "AudioFile" magazine.

"Gilman's intriguing and innovative system of magic based on the art of winemaking is deepened and clarified, which will delight fans of the first book, and plenty of action sequences keep things moving." ---Publishers Weekly