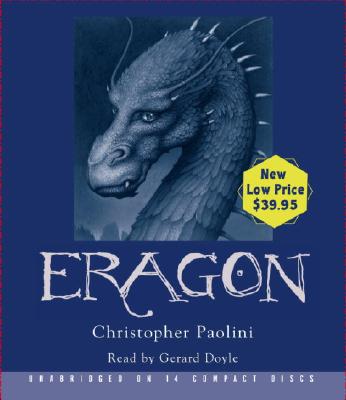 This is book number 1 in the The Inheritance Cycle series.

Fifteen-year-old Eragon believes that he is merely a poor farm boy - until his destiny as a Dragon Rider is revealed. Gifted with only an ancient sword, a loyal dragon, and sage advice from an old storyteller, Eragon is soon swept into a dangerous tapestry of magic, glory, and power. Now his choices could save - or destroy - the Empire.

"An auspicious beginning to both career and series." -- Publishers Weekly

Christopher Paolini's abiding love of fantasy inspired him to write the Inheritance Cycle, which quickly became an internationally bestselling series. He began the first draft of the introductory book in the series, Eragon, at age fifteen. Christopher draws inspiration for the world of Eragon and his dragon, Saphira, from the natural beauty that surrounds his home in Montana: the tumultuous weather, the roaring Yellowstone River, and the soaring Beartooth Mountains. Find out more about Christopher and the Inheritance Cycle at paolini.net.

“Will appeal to legions of readers who have been captivated by the Lord of the Rings trilogy.” –School Library Journal

"The author takes the near-archetypes of fantasy fiction and makes them fresh and enjoyable, chiefly through a crisp narrative and a likable hero." –Publisher's Weekly