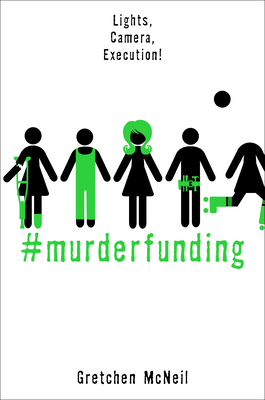 This is book number 2 in the #MurderTrending series.

Becca clenched her jaw. "I swear to God, if I catch you near my mom or brother with this, I will kill you."Stef smiled slyly. "See? You're mommy's little girl after all."
WELCOME TO WHO WANTS TO BE A PAINIAC?, the latest reality TV show on the hunt for the next big-hit serial killer. But don’t worry—no one is actually going to murder anyone, as real as the fake gore and pretend murder may appear . . . uh, right?
Seventeen-year-old Becca Martinello is about to find out. When her perfectly normal soccer mom dies in a car crash, a strange girl named Stef appears and lets Becca know that her deceased mom was none other than one of Alcatraz 2.0’s most popular serial killers—Molly Mauler. Soon, Becca ends up on Who Wants to Be a Painiac? to learn the truth about her mom’s connection to Molly Mauler, but things turn sinister when people are murdered IRL. Will Becca uncover dark secrets and make it out of the deadly reality show alive? Or will she get cut?

Gretchen McNeil is the author of #MurderTrending, I’m Not Your Manic Pixie Dream Girl and the Don’t Get Mad duology, as well as the YA horror novels Possess, 3:59, Relic, and Ten which was a 2013 YALSA Top Ten Quick Pick for Reluctant Young Adult Readers and was adapted as the Lifetime original movie Ten: Murder Island in 2017. You can find her online at www.GretchenMcNeil.com, on Instagram @Gretchen_McNeil, and on Twitter @GretchenMcNeil.

"A campy ride through an all-too-familiar and twisted world that will keep you guessing."—Mindy McGinnis, author of YALSA Top 10 Best YA Fiction of 2016 The Female of the Species

AccoladesBrightly Teen: 18 of the Most Exciting YA Books to Read in 2018GoodReads: Most Popular Books Published in August 2018Seventeen Magazine: The 20 Best YA Books of 2018