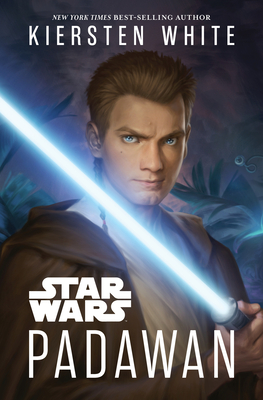 I've said it before, and I'll say it again, Obi-Wan Kenobi is my favorite jedi. Ever since I was a young kid watching the movies, I've been enamored with this shining example of what a Jedi Knight is supposed to be. In Padawan, Kiersten White faithfully captures the struggle of the young jedi-to-be as he tries to find balance in his place within the Jedi Order and the galaxy at large. When Qui-Gon doesn't show up the morning they're supposed to leave for a mission together, Obi decides to strike out on his own, determined to solve the mystery of a long lost planet. Once there, he discovers that much like himself, the whole planet has been thrown out of balance. In his quest to help restore the planet, Obi also rediscovers his connection to the Force, and reaffirms his drive to become a Jedi Knight.

BEING A TEENAGER IS HARD ENOUGH WITHOUT ALSO TRAINING TO BE A JEDI….

Obi-Wan Kenobi has not been apprenticed long to Qui-Gon Jinn, and he is chafing at Qui-Gon's training style: all meditation, no action. Obi-Wan yearns to prove himself on a mission, but when he and Qui-Gon are finally set to leave on an assignment, Qui-Gon is nowhere to be found. Angered by his master's abandonment, Obi-Wan sets out on the mission alone, determined to prove himself.

On a mysterious planet he encounters a pack of feral, Force-wielding teens who seem to be the planet's only inhabitants. As he experiences wild freedom with them and wonders if this isn’t the life he was meant for, Obi-Wan can’t escape the nagging sense that something is wrong with the Force there. Growing attachments, startling revelations, and a looming threat to both the planet and his new friends will bring Obi-Wan face-to-face with his worst fear: that maybe he was never supposed to be a Jedi at all. Can he connect with the living Force in time to save himself and everyone around him?

It's the star of the Obi-Wan Kenobi Disney+ limited series as you’ve never seen him before….


Kiersten White is the New York Times bestselling, Bram Stoker Award-winning, and critically acclaimed author of many books, including the And I Darken trilogy, the Slayer series, the Camelot Rising trilogy, and her upcoming adult debut, Hide. Her books have been published in over twenty territories, and her novel The Dark Descent of Elizabeth Frankenstein is currently in development with Sony Pictures Television.

Kiersten lives with her family in San Diego, where she can regularly be found pressing her hands against the glass of her back door, furtively whispering I love you to her deeply ambivalent tortoise, Kimberly.

"An absorbing adventure with an emphasis on self-discovery."—Kirkus Reviews

"Will get Buffy fans up in their feels."—Entertainment Weekly

PRAISE FOR THE CAMELOT BETRAYAL

PRAISE FOR THE GUINEVERE DECEPTION

"An enjoyable and even thoughtful entry into a mythos that has obsessed us for generations."—NPR

PRAISE FOR THE GUINEVERE DECEPTION

"Fascinating. . . . Kiersten White has taken the best parts of the Arthurian legend and made them all her own."—Renee Ahdieh