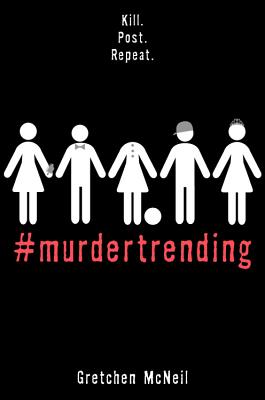 This is book number 1 in the #MurderTrending series.

@doctorfusionbebop: Some 17 y. o. chick named Dee Guerrera was just sent to Alcatraz 2.0 for killing her stepsister. So, how long do you think she'll last?

@morrisdavis72195: I hope she meets justice! She'll get what's coming to her! BWAHAHA!

@EltonJohnForevzz: Me? I think Dee's innocent. And I hope she can survive.

WELCOME TO THE NEAR FUTURE, where good and honest citizens can enjoy watching the executions of society's most infamous convicted felons, streaming live on The Postman app from the suburbanized prison island Alcatraz 2.0.

When seventeen-year-old Dee Guerrera wakes up in a haze, lying on the ground of a dimly lit warehouse, she realizes she's about to be the next victim of the app. Knowing hardened criminals are getting a taste of their own medicine in this place is one thing, but Dee refuses to roll over and die for a heinous crime she didn't commit. Can Dee and her newly formed posse, the Death Row Breakfast Club, prove she's innocent before she ends up wrongfully murdered for the world to see? Or will The Postman's cast of executioners kill them off one by one?

Gretchen McNeil is the author of I'm Not Your Manic Pixie Dream Girl and the Don't Get Mad duology, as well as the YA horror novels Possess, 3:59, Relic, and Ten which was a 2013 YALSA Top Ten Quick Pick for Reluctant Young Adult Readers and was adapted as the Lifetime original movie Ten: Murder Island in 2017. You can find her online at www.GretchenMcNeil.com, on Instagram @Gretchen_McNeil, and on Twitter @GretchenMcNeil.

"McNeil has written a compelling story that cleverly mixes dystopian, survivalist, and mystery genres together... Give to fans of action, mysteries, and Saw-esque tricks and traps."—Booklist

"The fast-paced action will appeal to fans of The Hunger Games... A gory thriller that moves at breakneck speed, this book will be hard to put down for older teens with a penchant for horror."—School Library Journal

"The bloodthirsty, reality-TV-obsessed culture and the corrupt government sponsoring the show [closely] mirror our own world. The provocative message... translates, powerfully, and centering Dee and her fellow inmates in this twisty, gory story ultimately serves as a sharp indictment of our flawed judicial system."—Entertainment Weekly

"A campy ride through an all-too-familiar and twisted world that will keep you guessing."—Mindy McGinnis, author of YALSA Top 10 Best YA Fiction of 2016 The Female of the Species

"McNeil's talent for creating an enticing plot paired with heart-pounding pacing shines in her latest."—Buzzfeed