The City Of Lost Fortunes (A Crescent City Novel) (Paperback) 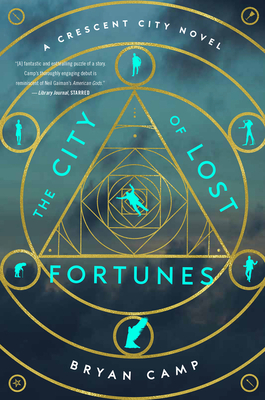 This book is perfect for fans of Neil Gaiman’s American Gods. Sure-footed and confident in a way that is often rare of a debut novel, the writing in this book is clear-voiced and remarkably intelligent. A mystery full of little twists and turns that reveal a multitude of criss-crossing, interconnected myths – Greek, Biblical, Norse, Voodoo, you name it – one by one like hands of cards being overturned. You’re bound to be delighted by the surprisingly familiar number of references you can mark out. Murdered gods, tricksters, tarot symbolism, and more abound against the simmering backdrop of post-Katrina New Orleans.

“Anne Rice fans will enjoy this fresh view of supernatural life in New Orleans, while fans of Kim Harrison’s urban fantasy will have a new author to watch.” — Booklist, starred review

The fate of New Orleans rests in the hands of a wayward grifter in this novel of gods, games, and monsters

Haunted by its history and by the destruction of Hurricane Katrina, New Orleans is hoping to survive the rebuilding of its present long enough to ensure that it has a future. Street magician Jude Dubuisson is likewise burdened by his past and by the consequences of the storm, because he has a secret: the magical ability to find lost things, a gift passed down to him by the father he has never known—a father who is more than human.

When the Fortune god is murdered, Jude is drawn into a world full of magic, monsters, and miracles. A world where he must find out who is responsible for the Fortune god’s death, uncover the plot that threatens the city’s soul, and discover what his talent for lost things has always been trying to show him: what it means to be his father’s son.

BRYAN CAMP is a graduate of the Clarion West Writers’ Workshop and the University of New Orleans’s MFA program. He started his first novel, The City of Lost Fortunes, in the back seat of his parents’ car as they evacuated the Crescent City during Hurricane Katrina.

"With mysticism emanating from every page, Bryan Camp paints a stunningly deceptive post-Katrina New Orleans in his debut, The City of Lost Fortunes...Camp succeeds in creating an alluringly magical fantasy realm, and he also knits it seamlessly into the reality of a vibrant New Orleans. The City of Lost Fortunes is a composition as stunning as the music that springs from its Louisiana setting. Play on, Bryan Camp, play on."—Shelf Awareness   "Stunning debut...Bryan Camp crafts a spellbinding vision of one of American's most magical cities."—BookPage   "It is rare that a serious literary novel is an easy read as well. The City of Lost Fortunes is an extraordinarily enjoyable read."—Washington Book Review   "A complex story that seduces the reader into a Crescent City filled with beauty and danger, loss and hope...seeking New Orleans and finding his own secret city...is Camp’s true magic as a writer."—The New Orleans Advocate   "Aloving ode to New Orleans and everything that makes it superlative: the food, the music, the soul-crushing humidity, and of course, the people. Ambitious, insightful, and filled with commentary on the diversity and similarities across world mythologies, this novel is absolutely the product of a writer who is worth keeping an eye on."—FantasyLiterature.com    "Camp clearly cares for the Crescent City’s soul, and he brings its scenes to sweltering life: the cafés, cemeteries, flood-damaged ruins, low-life bars, botanicas, pelican-skimmed causeways, diners, guard dogs, festivals — a phantasmagoric panorama of a true urban fantasy." —Seattle Review of Books   "A masterly game played by gods and monsters, a devastated city trying to rebuild, and compelling characters struggling to find their place in a strange world are all pieces of this fantastic and enthralling puzzle of a story. VERDICT Camp's thoroughly engaging debut is reminiscent of Neil Gaiman's American Gods, with the added spirit of the vibrant Big Easy." — Library Journal, STARRED   "A phantasmagoric murder mystery that wails, chants, laments, and changes shape as audaciously as the mythical beings populating its narrative....boisterously ingenious debut novel....For a first-time novelist, Camp shows adroitness in weaving the real-life exoticism of present-day New Orleans with his macabre alternate universe that's almost—what's the word—supernatural. (Among the unique characters attending a burial service for one of the murder victims: a centaur, a hairy giant, and "a fat, brown-skinned man with the head of an elephant.") Things only get weirder and more intense from there, but the engaging style, facility with folklore, and, above all, impassioned love for the city its characters call home keeps you enraptured by the book's most chilling and outrageous plot twists. One hopes for more of Camp's dangerous visions to spring from a city that, as he writes, 'is a great place to find yourself, and a terrible place to get lost.'" — Kirkus Reviews, STARRED review   "There isn’t a dull page as Jude determines who his real friends are. Anne Rice fans will enjoy this fresh view of supernatural life in New Orleans, while fans of Kim Harrison’s urban fantasy will have a new author to watch." — Booklist, STARRED review   "Camp’s fantasy reads like jazz, with multiple chaotic-seeming threads of deities, mortals, and destiny playing in harmony. This game of souls and fate is full of snarky dialogue, taut suspense, and characters whose glitter hides sharp fangs. […] Any reader who likes fantasy with a dash of the biza —